My point is, God’s still up there. The arrogance of people to think that we, human beings, would be able to change what He is doing in the climate is to me outrageous.

James Mountain Inhofe (/ˈɪnhɒf/; born November 17, 1934) is the senior United States senator from Oklahoma and a member of the Republican Party.

Before the Republicans regained control of the Senate in the November 2002 elections, Inhofe had compared the United States Environmental Protection Agency to a Gestapo bureaucracy, and EPA Administrator Carol Browner to Tokyo Rose. In January 2003, he became Chair of the Senate Committee on Environment and Public Works, and continued challenging mainstream science in favor of what he called "sound science", in accordance with the Luntz memo.

Since 2003, when he was first elected Chair of the Senate Committee on Environment and Public Works, Inhofe has been the foremost Republican promoting arguments for climate change denial in the global warming controversy. He [Ed. (in)famously] said in the Senate that global warming is a hoax, and has invited contrarians to testify in Committee hearings, and spread his views via the Committee website run by Marc Morano, and through his access to conservative media.

In 2012, Inhofe's The Greatest Hoax: How the Global Warming Conspiracy Threatens Your Future was published by WorldNetDaily Books, presenting his global warming conspiracy theory. He said that, because "God's still up there", the "arrogance of people to think that we, human beings, would be able to change what He is doing in the climate is to me outrageous." However, he says he appreciates that this does not win arguments, and he has "never pointed to Scriptures in a debate, because I know this would discredit me." His opposition to climate action is as much based on concerns about over-regulation of businesses, and he has shown ability to work with his Senate opponents on other issues: in 2003 he co-sponsored legislation to protect the Kemp's ridley sea turtle.

As Environment and Public Works chairman, Inhofe made a two-hour-long Senate Floor speech on July 28, 2003, in the context of discussions on the McCain-Lieberman Bill. He said he was "going to expose the most powerful, most highly financed lobby in Washington, the far left environmental extremists", and laid out in detail his opposition to attribution of recent climate change to humans, using the word "hoax" four times including the statement that he had "offered compelling evidence that catastrophic global warming is a hoax", and his conclusion expressing his belief that "manmade global warming is the greatest hoax ever perpetrated on the American people". He supported what he called "sound science" with citations from scientists; contrarians including Patrick Michaels, Fred Singer, Richard Lindzen and Sallie Baliunas as well as some mainstream scientists. Two of these, Tom Wigley and Stephen Schneider, later issued statements that Inhofe had misrepresented their work.

On July 29, 2003, the day after his Senate speech, Inhofe chaired an Environment and Public Works hearing with contrarian views represented by Baliunas and David Legates, and praised their "1,000-year climate study", then involved in the Soon and Baliunas controversy, as "a powerful new work of science". Against them, Michael E. Mann defended mainstream science and specifically his work which they and Bush administration disputed in the hockey stick controversy. During the hearing Senator Jim Jeffords read out an email from Hans von Storch saying he had resigned as editor in chief of the journal which had published the Soon and Baliunas paper, as the peer-review had "failed to detect significant methodological flaws in the paper" and the critique published by Mann and colleagues was valid.

In a continuation of these themes, Inhofe had a 20-page brochure published under the Seal of the United States Senate reiterating his "hoax" statement, comparing the Intergovernmental Panel on Climate Change (IPCC) to a "Soviet style trial", and in a section headed "The IPCC Plays Hockey" he attacked what he called "Mann's flawed, limited research." The brochure restated themes from Inhofe's Senate speech, and in December 2003, he distributed copies of it in Milan at a meeting discussing the United Nations Framework Convention on Climate Change, where he met "green activists" with posters quoting him as saying that global warming "is the greatest hoax ever perpetrated on the American people". He signed a poster for them, and thanked them for quoting him correctly.

In an October 2004 Senate speech he said "Global warming is the greatest hoax ever perpetrated on the American people. It was true when I said it before, and it remains true today."

"Perhaps what has made this hoax so effective is that we hear over and over that the science is settled and there is a consensus that, unless we fundamentally change our way of life by limiting greenhouse gas emissions, we will cause catastrophic global warming. This is simply a false statement."

In January 2005, Inhofe told Bloomberg News that global warming was "the second-largest hoax ever played on the American people, after the separation of church and state".

In The Republican War on Science, (Washington Post environment and politics reporter) Chris Mooney stated in 2006 that Inhofe "politicizes and misuses the science of climate change". During a heat wave in July 2006, Inhofe said to the Tulsa World newspaper that the environmentalist movement reminded him of "the Third Reich, the Big Lie", as "You say something over and over and over and over again, and people will believe it, and that's their strategy."

In a September 2006 Senate speech, Inhofe argued that the threat of global warming was exaggerated by "the media, Hollywood elites and our pop culture". He said that in the 1960s the media had switched from warning of global warming to warning of global cooling and a coming ice age, then in the 1970s had returned to warming to promote "climate change fears". In February 2007, he told Fox News that mainstream science increasingly attributed climate change to natural causes, and only "those individuals on the far left, such as Hollywood liberals and the United Nations" opposed this.

In 2006, Inhofe introduced Senate Amendment 4682 with Kit Bond (R-MO), which would have modified oversight responsibility of the Army Corps of Engineers. The League of Conservation Voters, an environmentalist group, said analyses for corps projects "have been manipulated to favor large-scale projects that harm the environment." During the 109th Congress, Inhofe voted to increase offshore oil drilling, to include provisions for drilling in the Arctic National Wildlife Refuge in the House Budget Amendment, and to deny funding for both low-income energy assistance and environmental stewardship, citing heavy costs and unproven programs.

In May 2009, he gave support to the idea that black carbon is a significant contributor to global warming.

Inhofe has been a recipient of monies from the fossil fuel industry. For example: "Exxon's beneficiaries in Congress include the Oklahoma senator Jim Inhofe, who called global warming a hoax, and who has received $20,500 since 2007, according to the Dirty Energy Money database maintained by Oil Change International."

US Senator Jim Inhofe re: Genesis

In a radio interview with Voice of Christian Youth America, Sen. James Inhofe (R-OK) argued that his belief that global warming is a hoax is biblically inspired.

Promoting his book The Greatest Hoax: How the Global Warming Conspiracy Threatens Your Future, Inhofe told interviewer Vic Eliason that only God can change the climate, and the idea that manmade pollution could affect the seasons is “arrogance”:::

Well actually the Genesis 8:22 that I use in there is that “as long as the earth remains there will be springtime and harvest, cold and heat, winter and summer, day and night.”

My point is, God’s still up there. The arrogance of people to think that we, human beings, would be able to change what He is doing in the climate is to me outrageous.

Inhofe believes that God will keep climate change at bay on the basis of Genesis 8:22: “As long as the earth endures, seedtime and harvest, cold and heat, summer and winter, day and night, shall not cease.” This verse comes after the Flood, where, in a series of statements, God promises not to inundate the earth again, making the rainbow a reminder of the promise.

Oklahoma’s senior senator has support. In its enunciation of a “Biblical Perspective of Environmental Stewardship,” the Cornwall Alliance, an evangelical organization dedicated to combating climate change activism, declares:

We deny, due to God’s faithfulness to His covenant, in which He proclaimed, after the Flood, that He would sustain the cycles on which terrestrial life depends for as long as the Earth endures (Genesis 8:22), that God’s curse on the Earth negates either the dominion mandate (Genesis 1:28) or the robustness and self-correcting resilience of the God-sustained Earth.

God’s curse refers to one of the punishments for Adam and Eve’s original sin: “Cursed is the ground because of you; through painful toil you will eat food from it all the days of your life,” etc. (Genesis 3:17-19) But notice where the proof-texting stops. That business about the Earth’s “robustness and self-correcting resilience” is interpretive license, not biblical perspective. As for Genesis 8:22, it hardly constitutes a claim that human beings can do nothing to change the climate.

In fact, biblical inerrancy as understood over the past century does not preclude human agency on so grand a scale. To the contrary, apocalyptic prognostication is full of it. Not only are normal wars and rumors of wars taken to presage the End Times, but the invention of nuclear weapons has provided practitioners of Prophecy with ample fuel. “Every second of every day, nuclear bombs are aimed at U.S. by Russia and China,” declares one. “Soon the giant nuclear sword will be unleashed upon a wicked world.”

To be sure, the traditional Christian view, derived from the Second Epistle of Peter along with the story of Noah, takes the position advanced in the old spiritual: “God gave Noah the rainbow sign, / No more water, the fire next time.”

If global warming is allowed to continue, next time we can look forward to both. 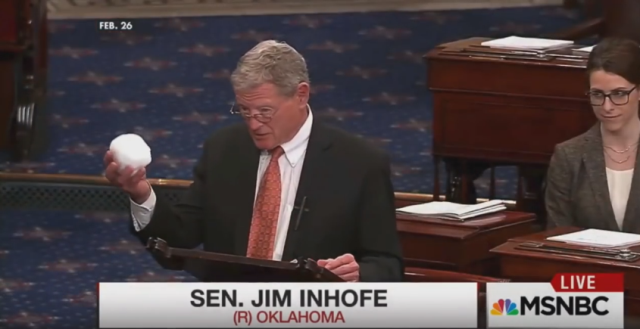