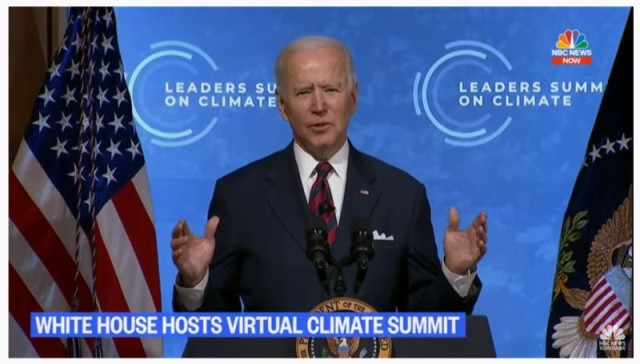 It’s the most ambitious US goal ever set

By November, the U.N. climate negotiating process calls for 200 nations to ratchet up commitments to cut emissions of heat-trapping greenhouse gases by 2030. The rich countries need to come up with more money to help the poor countries develop greener power and adapt to climate change’s harsh realities. And nations need to agree on a price on carbon pollution after several years of gridlock. They must figure out essentially how to make it all work.

(AP) Biden’s summit, organized in less than 100 days, was designed to send the world off on a fast start toward Glasgow, and experts said it did so. They figure it pushed the globe anywhere from one-eighth to more than halfway along the journey, with mixed opinions on whether the United States did enough.

“If it were 100 miles to Glasgow, we have just done the first 12 miles on the lowlands, and we have a 88 hard miles to go, with a lot of difficult terrain to cross before we get there,” said Bill Hare, director of the German think tank Climate Analytics. Hare said while countries showed a significant increase in ambition to fight climate change, he was “hoping for slightly more.”

Climate scientist Zeke Hausfather, who directs climate issues at the Breakthrough Institute, was more optimistic: “I’d say this gets us about half the way (say, 50 miles) to where we need to get by Glasgow.”

Nate Hultman, director of the University of Maryland’s Center for Global Sustainability, was even more optimistic: “This has ended up being a critical international moment that provided a strong boost. ... We’re now, I’d say, about 70 miles toward Glasgow.”