The passage of AB 32, the California Global Warming Solutions Act of 2006, marked a watershed moment in California’s history. By requiring in law a sharp reduction of greenhouse gas (GHG) emissions, California set the stage for its transition to a sustainable, low-carbon future. AB 32 was the first program in the country to take a comprehensive, long-term approach to addressing climate change, and does so in a way that aims to improve the environment and natural resources while maintaining a robust economy.

According to leading climate scientists from around the world, anthropogenic climate change (that caused by humans) is a significant and growing problem that must be addressed in order to avoid the worst effects. Climate change is the result of various GHGs that are emitted into the atmosphere, such as carbon dioxide (CO2) and methane (CH4), which have a heat forcing effect on the atmosphere. Sharp rises of GHGs over the last century and a half have led to higher overall worldwide temperatures, reduced snowpack in the higher elevations, greater fluctuations of temperature and precipitation, global sea level rise and more frequent and severe extreme weather events, including hurricanes, heatwaves and droughts.

The Legislature finds and declares all of the following:

(a) Global warming poses a serious threat to the economic well-being, public health, natural resources, and the environment of California. The potential adverse impacts of global warming include the exacerbation of air quality problems, a reduction in the quality and supply of water to the state from the Sierra snowpack, a rise in sea levels resulting in the displacement of thousands of coastal businesses and residences, damage to marine ecosystems and the natural environment, and an increase in the incidences of infectious diseases, asthma, and other human health-related problems.

(b) Global warming will have detrimental effects on some of California’s largest industries, including agriculture, wine, tourism, skiing, recreational and commercial fishing, and forestry. It will also increase the strain on electricity supplies necessary to meet the demand for summer air-conditioning in the hottest parts of the state.

AB 32 includes the major GHGs and groups of GHGs that are being emitted into the atmosphere. These gases include:

AB 32 requires ARB to develop a Scoping Plan which lays out California’s strategy for meeting the goals. The Scoping Plan must be updated every five years. In December 2008, the Board approved the initial Scoping Plan, which included a suite of measures to sharply cut GHG emissions. In May 2014, ARB approved the First Update to the Climate Change Scoping Plan (Update), which builds upon the initial Scoping Plan with new strategies and recommendations. The Update highlights California’s progress toward meeting the near-term 2020 GHG emission reduction goals, highlights the latest climate change science and provides direction on how to achieve long-term emission reduction goal described in Executive Order S-3-05.

Reductions in GHG emissions will come from virtually all sectors of the economy and will be accomplished from a combination of policies, planning, direct regulations, market approaches, incentives and voluntary efforts. These efforts target GHG emission reductions from cars and trucks, electricity production, fuels, and other sources. The status of these efforts can be found in Appendix B of the Update.

In 2006, the Legislature passed the California Global Warming Solutions Act of 2006 [Assembly Bill 32 (AB 32)], which created a comprehensive, multi-year program to reduce greenhouse gas (GHG) emissions in California. AB 32 required the California Air Resources Board (ARB or Board) to develop a Scoping Plan that describes the approach California will take to reduce GHGs to achieve the goal of reducing emissions to 1990 levels by 2020. The Scoping Plan was first approved by the Board in 2008 and must be updated every five years. The First Update to the Climate Change Scoping Plan was approved by the Board on May 22, 2014. ARB is moving forward with a second update to the Scoping Plan to reflect the 2030 target established in Executive Order B-30-15.

(LA Times / Sacramento) In this year’s debate over California climate policy, much of the attention has centered on a proposal to extend and expand the state’s mandate for reducing greenhouse gas emissions.... (Controversial is another) proposal "to reduce greenhouse gas emissions to 40% below 1990 levels by 2030. The current target is reaching 1990 levels by 2020, a goal the state is on track to meet."

The state’s 2006 landmark climate law, AB 32, set a target for reducing emissions but gave significant leeway to regulators in figuring out how to get there.

“I think the genius of our effort has been that the Legislature was willing to allow the administration to come up with the gritty details of the program, and to be a little bit flexible and experimental about these things, knowing that if we screw up in some way, we can fix it,” she said. “I think that’s what we need to continue to do.”

A new crop of lawmakers who face looser term limits than their predecessors see an opportunity to claw back some authority.

Requirements for direct emissions reductions are fiercely opposed by the Western States Petroleum Assn. and the California Manufacturers & Technology Assn., organizations that prefer a market-based system such as cap-and-trade.

The bill, while not including cap and trade, could provide a point of leverage in negotiations with moderate Democrats over the controversial program’s extension – with proponents likely to cast cap and trade as an alternative to other, less flexible means of meeting targets included in SB 32.

Brown and his staff reached out to lawmakers privately on Tuesday to lobby for the bill, and he said in a prepared statement that he will sign both SB 32 and AB 197. Brown ripped into what he called “the brazen deception of the oil lobby and their Trump-inspired allies who deny science and fight every reasonable effort to curb global warming.”

“With these bills, California’s charting a clear path on climate beyond 2020 and we’ll continue to work to shore up the cap-and-trade program, reduce super pollutants and direct more investment to disadvantaged communities.”

Jerry. He's a character -- and don't get him mad. He gets focused, even more so than his usual exceptional intelligence n focus. Doing the 92 platform together taught me about him in so many ways -- and after the pres campaign and his return to frontline politics -- and what a return -- the vision is there to see. Big picture vision and the skills. What a contrast w the two candidates running for pres in 16 ... and yep, running again would've been something Jerry, if age wasn't nipping at us -- http://touch.latimes.com/#section/2426/article/p2p-88623313/ 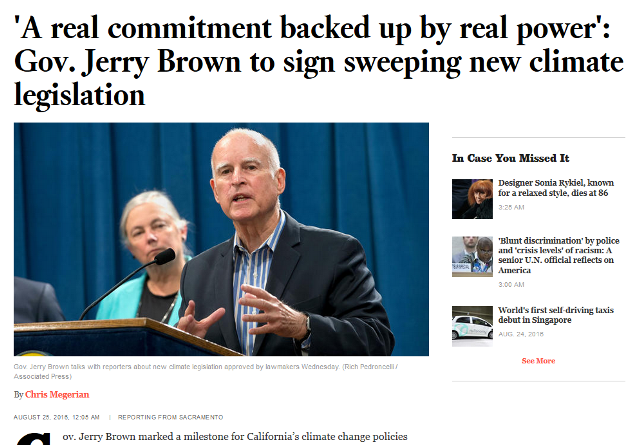