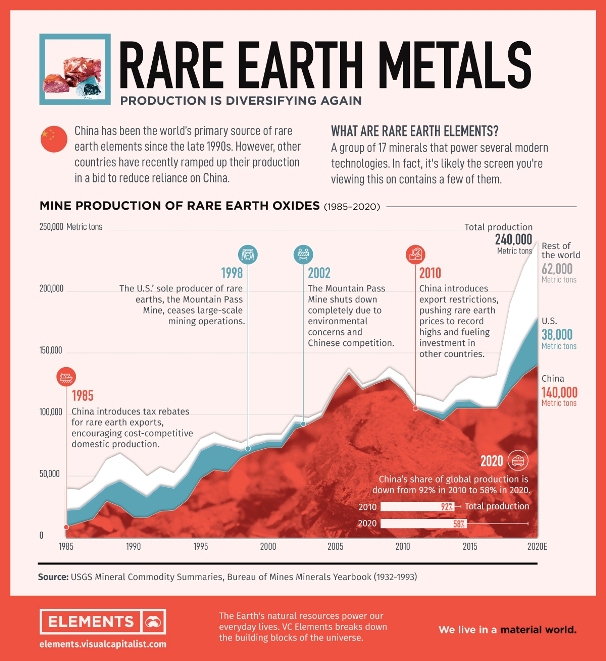 Although lithium and cobalt are key components in current electric vehicle production and often called rare earth metals, all rare earth metals and associated minerals/resources needed in the production of lithium-ion batteries and multiple battery-centric products must be acknowledged and addressed as the future of green energy manufacturing and production is planned.

Now, with our associate Strategic Demands, GreenPolicy360 takes another look at the future of EVs and how the current strategic changes in Central Asia / Near East / Afghanistan can impact the production and use of rare earths, particularly in China as the economic engine called the 'factory of the world' attempts to shift toward a future 'eco-nomics'. The new Tesla factory in China is only a small part of a much larger central planning strategy to move toward global competitive advantage.

Check out the Belt and Road Initiative.....

>On July 28 (2021) China's Foreign Minister Wang Yi met a Taliban delegation led by Mullah Abdul Ghani Baradar, one of the senior-most figures in the group, in Beijing. While Beijing had engaged with the Taliban previously, the publicity given to the meeting was interpreted as being unusual.

>Other than the usual diplomatic platitudes, Wang called the Taliban "an important military and political force in Afghanistan" and a group that "is expected to play an important role in the country's peace, reconciliation and reconstruction process".

>For his part, Baradar said the Taliban "hopes that China will be more involved in Afghanistan's peace and reconciliation process and play a bigger role in future reconstruction and economic development.” He added “The Afghan Taliban will also make its own efforts toward fostering an enabling investment environment.”

>China shares a small border with Afghanistan called the Wakhan Corridor that is just 210km long and between 20 km and 60 km wide. While the length of the border may appear insignificant, its location is what makes Wakhan crucial in geopolitics.

>The Wakhan Corridor links China's restive Xinjiang province with Afghanistan's Badakshan province, with Tajikistan to the north and Pakistan's Khyber Pakthunkhwa and Kashmir to the south. The mountainous terrain in the region had made the Wakhan Corridor a difficult place for building road networks... its location is crucial for the security and viability of the China-Pakistan Economic Corridor (CPEC), a key part of China's larger Belt Road Initiative (BRI). An article by Australia's Lowy Institute explained the significance of Wakhan as "The port of Gwadar in Pakistan marks the beginning of this corridor (CPEC), and the tip of the Wakhan marks entry point for CPEC into China."

>After the fall of the Taliban in 2001, one of the key projects China was involved in was to develop a copper mine at Mes Aynak in Logar province. A Chinese company won a 30-year lease in 2008 worth $3.5 billion to develop the mine to extract copper. The mine is believed to have the world's second-largest copper deposit, valued at $50 billion. Progress on the project has been very slow, with the previous Afghan government even mulling legal action against the development consortium. However, the deal with the Chinese consortium remains in effect.

>The return to power of the Taliban may well prove a catalyst to boost (mining) projects. Then, there are prospects of future projects.

>Afghanistan is believed to have large deposits of gold, iron, copper, zinc, lithium and other rare earth metals, valued at over $1 trillion.

"Afghanistan may hold 60 million metric tons of copper, 2.2 billion tons of iron ore, 1.4 million tons of rare earth elements (REEs) such as lanthanum, cerium, neodymium, and veins of aluminium, gold, silver, zinc, mercury..." an analysis in The Diplomat in 2020 said.

>Various rare earth elements are used for making key components of phones, cameras, computer disks, TVs and other equipment. They also have applications in clean energy and defence industries.

>China potentially getting control of untapped deposits of lithium and rare earths in Afghanistan would prove a major advantage for Beijing in its evolving competition with the US and Europe for resources. In 2019, the US imported 80 per cent of its rare earth minerals from China, while the EU states got 98 per cent of these materials from China. 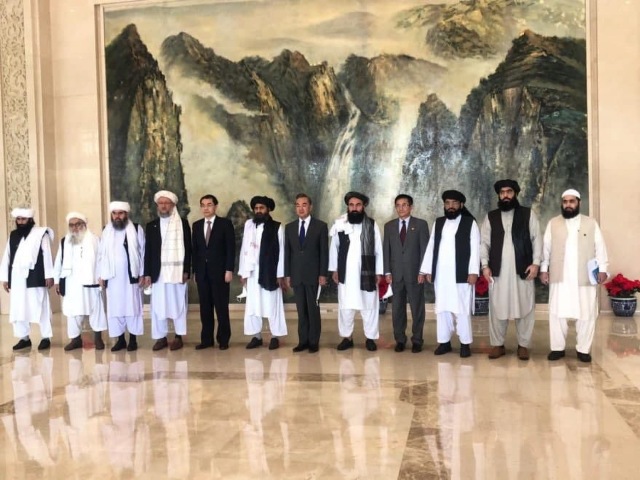 China plans to reopen copper mine in Afghanistan: Beijing seeks closer ties with the Taliban

The International Energy Agency said in May that global supplies of lithium, copper, nickel, cobalt and rare earth elements needed to increase sharply or the world would fail in its attempt to tackle the climate crisis. Three countries — China, the Democratic Republic of Congo and Australia — currently account for 75% of the global output of lithium, cobalt and rare earths.

The average electric car requires six times more minerals than a conventional car, according to the IEA. Lithium, nickel and cobalt are crucial to batteries. Electricity networks also require huge amounts of copper and aluminum, while rare earth elements are used in the magnets needed to make wind turbines work.

The US government has reportedly estimated that lithium deposits in Afghanistan could rival those in Bolivia, home to the world's largest known reserves.

"If Afghanistan has a few years of calm, allowing the development of its mineral resources, it could become one of the richest countries in the area within a decade," Said Mirzad of the US Geological Survey told Science magazine in 2010.

The Afghan government’s hopes of economic development were high in 2008 when it signed contracts with a consortium consisting of Metallurgical Corporation of China (MCC) and Jiangxi Copper Corporation. MCC has since been absorbed into China MinMetals Corporation, a vast entity with expertise covering the supply chain from exploration to advanced processing.

The contracts not only promised favourable premium and royalty payments to the Afghan government, but also the construction of much needed infrastructure, including a railway and power plant by the consortium.

“It was the big contract, raising hopes and expectations not only for Mes Aynak, but for the extractive industry in Afghanistan as a whole,” said Stephen Carter, Afghanistan campaign leader for Global Witness, an international non-governmental organisation working on corruption, conflict and natural resources.

Mes Aynak, one of the world’s biggest untapped copper sources with an estimated 5.5 million metric tons of high-grade metal