Can ‘Carbon Smart’ Farming Play a Key Role in the Climate Fight? Yes, but More Data Needed to Measure/Monitor Impact

As efforts to wean society off fossil fuels have stalled, “natural climate solutions” such as soil carbon sequestration have rapidly gained steam. In 2018, the National Academies of Sciences, Engineering, and Medicine reported that “negative emissions technologies” — techniques for removing carbon from the atmosphere, rather than simply reducing new emissions of carbon — are needed to stabilize global warming below 2 degrees Celsius (3.6 degrees Fahrenheit), the level scientists believe could be catastrophic.

The Academies’ report identified soil sequestration as a cost-effective and readily available climate solution, with the potential to remove 250 million metric tons or more of carbon dioxide per year in the United States alone. That’s about 5 percent of the U.S.’s annual CO2 emissions, which totaled 5.4 billion tons in 2018. This month, a team led by researchers at The Nature Conservancy (TNC) estimated that if implemented globally, soil conservation and soil-building activities could provide nearly 10 percent of the carbon reduction needed to avoid breaching the 2-degree barrier.

A Boston-based agricultural technology firm, Indigo Ag, says that thousands of farmers working more than 18 million acres of farmland, nearly all in the U.S., have expressed interest in enrolling in its carbon-sequestration program.

But a growing number of scientists worry that mounting societal pressure to do something to counter climate change is pushing money into so-called carbon farming before the science needed to underpin it is mature. New studies reveal that even long-accepted carbon sequestration practices may not yield hoped-for climate benefits. Measurements of soil at depths down to 2 meters have cast serious doubt on the climate impact of reducing soil tillage, and similar studies are now questioning how much carbon cover crops can sequester in some circumstances. A massive ramp-up of soil carbon data from working farms is urgently needed, experts say.

Without question, the world must transition to renewable energy, but making that transition, even at the rate of the most optimistic projections, won’t be fast enough to stabilize the climate. In addition to renewable energy, we must draw down carbon from the atmosphere and replenish the depleted stores of carbon in the soil where it enhances fertility, boosts productivity, and creates drought resilience. Agriculture can be a driving force to mitigate climate change by adopting carbon farming practices.

“Carbon Farming: Agriculture’s Solution to Climate Change” presents the solutions, practices and latest research on how farmers and ranchers can play a preeminent role in addressing climate change and ensuring food security by stewarding working landscapes to sequester carbon.

Farmers, ranchers, scientists, food systems activists and ecologists, who are developing a deep understanding of how to use carbon as an organizing principle in their work, share how they are shifting the perception of carbon as a problem and designing systems that use carbon as a benefit and a solution...

Climate Change Solution Beneath Our Feet

Cover Crops: A Farming Revolution with Deep Roots in the Past / NYT

The practice of seeding fields between harvests not only keeps topsoil in place, it also adds carbon to the soil and helps the beneficial microbes, fungus, bacteria and worms in it thrive...

Cover cropping is used only by a small minority of farmers. When the U.S. Agriculture Department asked for the first time about cover cropping for its 2012 Census of Agriculture report, just 10.3 million acres — out of about 390 million total acres of farmland sown in crops — on 133,124 farms were planted with cover crops. The next census won’t be done until 2017, but experts say that the practice has spread...

“We’ve never seen anything taken up as rapidly as using cover crops,” said Barry Fisher, a soil health specialist at the U.S. Natural Resources Conservation Service, an agency within the Agriculture Department.

Modern farming practices like applying fertilizer and herbicides and not tilling their fields, or “no till,” have helped farmers increase yields and reduced labor, but they have also unintentionally interfered with root systems, increased erosion and disrupted underground microbial activity and insect life that are vital to plant and soil health.

It's in the soil, healthy soil, living soil

The website of the climate-smart agriculture approach is an entry point for essential information...

Climate-smart agriculture, forestry and fisheries (CSA), as defined and presented by FAO at the Hague Conference on Agriculture, Food Security and Climate Change...

A Call to Action. How Climate-Smart Agriculture Can Help in countries where the economy is heavily based on agriculture and development of the agricultural sector...

6. The Other CSA: What Is Climate-Smart Agriculture?

Climate-smart agriculture could be the only way to feed our planet as climate change makes it impossible for us to farm the way we do now. But what is it?

We need global policies that recognize the critical role of agriculture for climate change...

Climate-smart agriculture is a way to achieve short-and-long-term agricultural development priorities in the face of climate change...

Addressing depleted soils, unreliable access to water, outmoded agricultural practices and a lack of coping strategies for adapting to a changing climate are leading to reduced agricultural productivity, income generation, and food security for farmers worldwide.

Examples of climate-smart systems showcasing success stories in various countries. The cases have been selected from the FAO Climate-Smart Agriculture (CSA) Sourcebook (PDF) 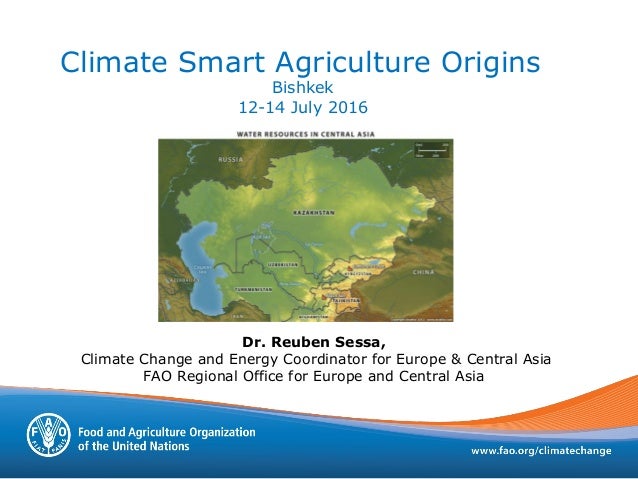