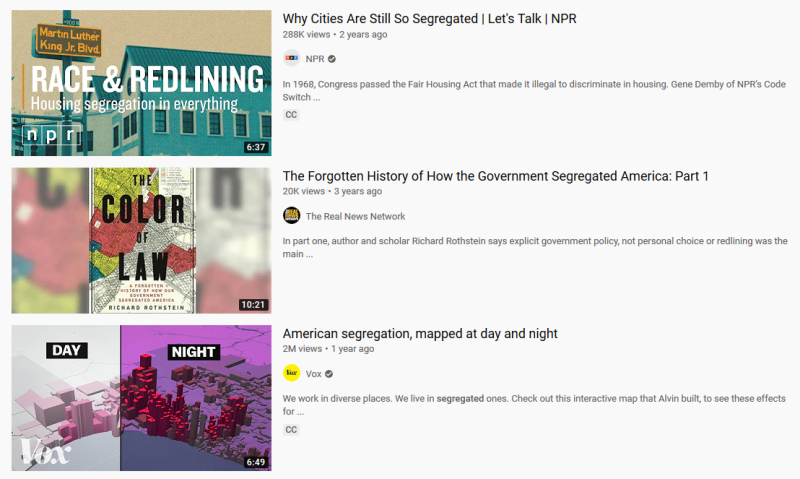 The Color of Law

Siterunner/SJS: Many years ago, in 1971, I helped start up a public interest group in Los Angeles that took on the challenge of discriminatory bank lending. The group was called the 'Center for New Corporate Priorities' and the anti-redlining campaign we put together was one of the first in the US. It became a successful campaign with the California legislature taking our maps of Los Angeles neighborhoods, we compared bank real estate-business lending in East LA and South LA with per capita lending statistics in Beverly Hills and West LA. The discrepancy was stark. Bank and lending practices were taking deposits from poor neighborhoods and communities, and lending to upscale, wealthy areas. The pattern was there to be seen and the case that we presented was graphic and powerful.

The data was not easy to obtain, it was before computers were widely available and computer databases were proprietary and carefully controlled and limited from public view. We were not dissuaded. Our Center for New Corporate Priorities tracked down available data, public-accessible city-county maps and regulated banking data and then we painstakingly compiled neighborhood-by-neighborhood maps with census tracts comparing banking practices and lending amounts.

We 'proved' conclusively with data and statistics the prevailing discriminatory lending practices, then took these maps, graphics, and charted data to Representatives in the state's capitol, Sacramento, who then held hearings.

The hearings led to follow-on investigations and more convincing mapping and evidence which resulted in legislation and the first era of anti-redlining legislation-banking regulation, an extension of the Fair Housing Act/Civil Rights Act of 1968, the Community Reinvestment Act, and federal/state/local models for action across the country.

We had accomplished a small step. Regulations and reform practices began. Unfortunately the damage of redline real estate-business-personal lending discrimination continues to this day. Much remains to be achieved by generational action, activists, social warriors, lawyers, citizens of good will and steady committed visionary leaders.

Redlining and Its Damaging Consequences in America

More on Race and the Legacy of Housing Discrimination:

Comments made by former New York City Mayor Michael Bloomberg surfaced earlier this year in which he asserted that the real estate implosion leading to the financial crisis occurred because of the end of redlining – a notion that is, according to this analysis, utterly contradicted by the facts. (Brookings)

“The private market does not work effectively in black communities,” according to a report noting that for every dollar that banks lend in majority-white neighborhoods in Chicago they lend just 12 cents in majority-black and Latino areas. “It wasn’t set up to work, and it has not worked.” (Next City)

Connecticut is one of the most segregated places in the US, according to this report, but the state’s governor is resisting calls to overhaul its exclusionary housing laws and address its affordable housing crisis. (ProPublica)

According to an academic studying the Housing Choice Voucher Program in Baltimore, redlining and other practices made US cities so segregated that it’s naïve to think that simply applying free-market principles now will fix the problem. (Next City)