GreenPolicy360: So what do suburban home lawns, those streets upon streets of manicured statements of domestic happiness and tranquility, have to do with the Hoover Dam and Lake Mead, or Glen Canyon Dam and Lake Powell? For that matter, what does the suburbia of all of the vast expanse of Los Angeles sprawling post World War 2 housing tracts have to do with a water crisis in the Southwest that is threatening to change life as we know it in the Upper Colorado River Basin (Utah, Colorado, New Mexico) and the Lower Basin (California, Arizona, Nevada). It's 2022 and things are changing in the climate-change induced drought that has delivered drought and, soon, an end to the water-delivery system that has provided lifeblood water pumping the Colorado River throughout the Southwest.

But first start with the artificial, the lawns, vast property-by-property expanses of fertilized and heavily watered lawns in arid, semi-arid, drought-stricken areas, and the crops that aren't meant for desert-agriculture, the alfalfa, hay, cotton, leafy vegetables and yet here we are -- the results of power grabs, water rights law, backroom deals, big money deep pockets and secretive deals ala the movie "Chinatown", governments bought, politicos sold, and the results are an unsustainable system approaching crunch time. It's 2022 and this has been going on for decades...

Take a peek and ask yourself what's happening next?

From The New York Times:

They Fought the Lawn. And the Lawn Lost

After their homeowner association ordered them to replace their wildlife-friendly plants with turf grass, a Maryland couple sued. They ended up changing state law.

COLUMBIA, Md. — Janet and Jeff Crouch do not know which flower or plant may have pushed their longtime next door neighbor over the edge, prompting him to pen complaint after complaint about the state of their yard.

Perhaps it was the scarlet bee balm that drew hummingbirds in darting, whirring droves. Or the swamp milkweed that Monarch butterflies feasted upon before laying their eggs. Or maybe it was the native sunflowers that fed bumblebees and goldfinches.

Whatever it was, their neighbor’s mounting resentment burst to the fore in the fall of 2017, in the form of a letter from a lawyer for their homeowner association that ordered the Crouches to rip out their native plant beds, and replace them with grass.

The couple were stunned. They’d lived on their quiet cul-de-sac harmoniously with their neighbors for years, and chose native plants to help insects, birds and wildlife thrive. Now the association was telling them that their plantings not only violated the bylaws, but were eyesores that hurt property values. “Your yard is not the place for such a habitat,” the letter read.

More agricultural acreage should be fallowed, and less water diverted from dried-out rivers and streams for unsustainable vineyards and orchards. Floodplains should be restored, so that in wet winters the excess water that once might have been frozen on mountainsides but now rushes downhill as flash floods can gather, settle and seep into the ground over the dry springs, summers and falls, and in the meantime sustain birds and spawning fish whose ancient marshes and wetlands we have drained. Urban areas, once they use their water, must purify it and use it again, because imports from distant places will be less certain, and it is foolish to keep flushing all that useful water away.

The years of steady and predictable water flow are over, and there is no sign of them coming back in our lifetimes. This is it. We have to build, and grow, and legislate, and consume for the world as it is, not as we may remember it.

GreenPolicy360: Lawns and pollution go together, it's all connected.... pesticides and the nitrogen, phosphates, potassium, the advertised famous brands, the ubiquitous lawn additives and fertilizers, and the chemicals and organic pollution draining off of the manicured lawns and feeding into streets, and gullies, drains and sewers, and downward through watersheds where it delivers its pollution into streams, rivers, bays, estuaries, along coastlines, waterways and wetlands.... and percolating down into aquifers and well water, delivering toxics, health impacts, 'kill offs', water pollution, red tides and human and eco-health impacts, oxygen-depletion 'events' that act to devastate eco-systems and animal/living populations, breeding areas, reefs and coral environments, intercoastal zones, beaches, coastal shorelines...

Lawns destroy environments and carry far-reaching impacts.... lawns are not just "pretty things" for homeowners, homeowner associations to maintain property values and "keep up with the Jones's" as the saying goes'.... 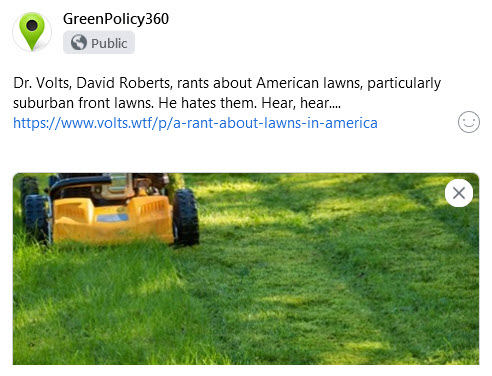 "The American Obsession with Lawns"

by Krystal D'Costa / Via Scientific American

Americans’ lawns now cover an area three times larger than any irrigated crop in the U.S.

According to a new study from NASA scientists in collaboration with researchers in the Mountain West, there is now an estimated total of 163,812 square kilometers, or more than 63,000 square miles, of lawn in America — about the size of Texas

Lawns are ubiquitous in the American urban landscapes. However, little is known about their impact on the carbon and water cycles at the national level. The limited information on the total extent and spatial distribution of these ecosystems and the variability in management practices are the major factors complicating this assessment.

In this study, relating turf grass area to fractional impervious surface area, it was estimated that potentially 163,812 km2 (± 35,850 km2) of land are cultivated with some form of lawn in the continental United States, an area three times larger than that of any irrigated crop. Using the Biome-BGC ecosystem process model, the growth of turf grasses was modelled for 865 sites across the 48 conterminous states under different management scenarios, including either removal or recycling of the grass clippings, different nitrogen fertilization rates and two alternative water irrigation practices. The results indicate that well watered and fertilized turf grasses act as a carbon sink, even assuming removal and bagging of the grass clippings after mowing. The potential soil carbon accumulation that could derive from the total surface under turf (up to 25.7 Tg of C/yr with the simulated scenarios) would require up to 695 to 900 liters of water per person per day, depending on the modeled water irrigation practices, and a cost in carbon emissions due to fertilization and operation of mowing equipment ranging from 15 to 35% of the sequestration.

Lawns are ubiquitous in the American urban landscapes, as they can be found on most residential lots, parks, institutional and commercial landscapes, and golf courses, often as monocultures of turf grasses, independently of the local climate (Jenkins 1994). Existing estimates indicate that in the early 1990’s the surface cultivated with turf was up to three times larger than that of irrigated corn, the largest irrigated crop in the U.S. (DPRA, Incorporated 1992).

Turf grasses contribute to soil carbon (C) sequestration (Bandaranayake et al., 2003; Qian and Follett, 2002; Van Dersal, 1936) and, as a component of urban vegetation, to the mitigation of the urban heat island effect (Spronken-Smith et al., 2000) and to enhanced water infiltration compared to bare soil or impervious surfaces. However, turf has also been linked with a number of negative environmental impacts. Turf grasses often pose a neglected environmental hazard through the use of lawn chemicals and over-fertilization (Robbins and Sharp, 2003; Robbins et al., 2001), and, where used, irrigation of turf grasses sharply increases the summer water consumption for residential and commercial use, especially if grown in arid and semiarid regions, where it can account for 75% of the total household water consumption (Mayer et al., 1999).

In spite of the pervading presence of turf grass systems in the urban and suburban landscape and their considerable use of water resources, there continues to be little knowledge about the ecological functioning of these systems at the national level. If turf grasses are to be considered carbon sequestering components of the urban ecosystems, what is their contribution to the national carbon sequestration potential? And what is the estimated water use to sustain this sequestration potential? The fragmented distribution of residential and commercial lawns and the large variability in management practices adopted to grow the different types of turf surfaces certainly challenges the task of answering these questions.

In this study we present an estimate of the carbon sequestration potential of U.S. lawns and the implied water use by producing a spatially explicit estimate of their distribution within the contiguous 48 states and simulating their growth with an ecosystem process model...