People living in Iceland are understandably devastated after news broke that one of their glaciers has all but disappeared because of climate change.

According to the BBC, it was officially declared 'dead' in 2014 when researchers found it wasn't thick enough to move, but the recent NASA pictures showed just how much ice had receded since then.

So, in honor of the glacier, a group of people travelled to where it once stood and held a funeral. In addition to that, they also erected a plaque that had a pretty chilling message attached to it.

"Ok is the first Icelandic glacier to lose its status as glacier," it reads.

"In the next 200 years all our main glaciers are expected to follow the same path. This monument is to acknowledge that we know what is happening and what needs to be done.

In addition to that scary message, it also notes the current level of CO2 in the atmosphere so that generations in the future have a reference point to look back on.

People brought signs that said 'Declare Climate Emergency' and 'Pull The Emergency Brake' as they hiked to the site. 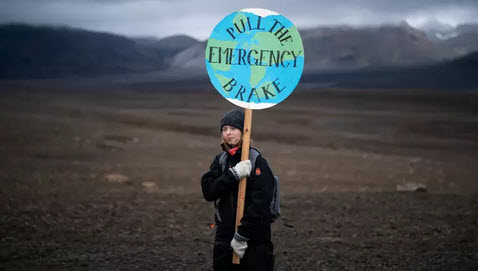 Iceland's Prime Minister Katrín Jakobsdóttir said: "This is the first Icelandic glacier that's formally declared an 'ex-glacier'... we will see other glaciers disappear in the next decades and centuries, which is obviously a very big thing for our landscape, nature, ecosystem, but also for our energy system because we produce renewable energies from the glacier rivers. I think it's so important for every leader of the world to be conscious of that. We are seeing the faces of climate crisis differently around the world, but it's the same crisis. And we need international cooperation on an unprecedented scale. We really need to rethink the way we are working to meet this challenge."

In 2000, glaciologist Oddur Sigurdsson made a map of all the glaciers around Iceland and found more than 300. Seventeen years later, 56 have disappeared.

This file contains additional information, probably added from the digital camera or scanner used to create or digitize it. If the file has been modified from its original state, some details may not fully reflect the modified file.
Retrieved from "https://www.greenpolicy360.net/mw/index.php?title=File:Iceland_funeral_for_a_glacier_-_August_2019.jpg&oldid=80472"
Categories: