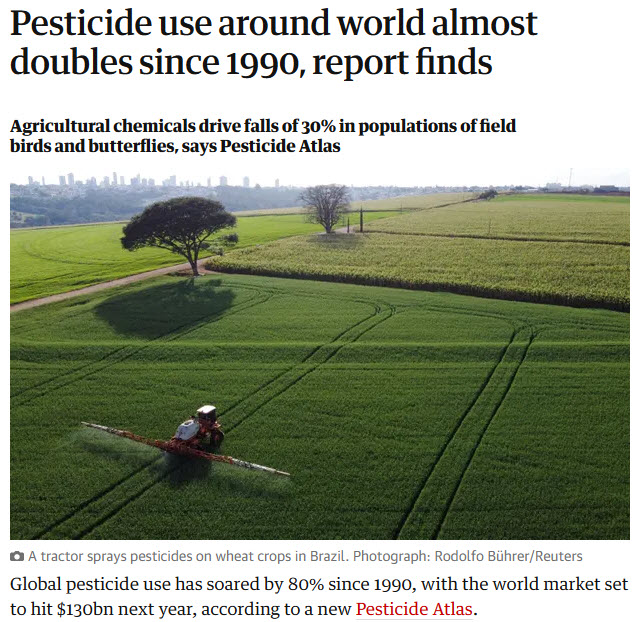 “In beer and in honey, on fruit and on vegetables, on playgrounds’ grass, in urine and even in the air – traces of pesticides used in agriculture can be found everywhere. That pesticides deteriorate human health, biodiversity, water, and soil is not a new insight by any means."

As early as 1962, biologist Rachel Carson published her globally acclaimed book “Silent Spring” in which she described the harmful effects of pesticide use. Her work has been groundbreaking for the environmental movement and led to the ban of highly toxic chemicals such as DDT.

But today (in 2022), sixty years after Carson’s book was released, greater amounts of pesticides are being used worldwide than ever before despite stricter approval regulations – and voluntary as well as binding agreements on the handling of pesticides. The cultivation of genetically modified plants like soy, engineered by the same corporations that are producing pesticides, has contributed to the increased use of herbicides, especially in biodiversity rich countries.

With its Green Deal, the EU is now taking a step forward: The EU’s Farm to Fork Strategy asks Member States to reduce pesticide use and associated risks by fifty percent by 2030. Whether the target can be met depends on the implementation of the new regulation on pesticides proposed by the European Commission in June 2022. The EU's large Common Agricultural Policy (CAP) funds could provide financial aid for conversion but the CAP has so far failed to provide sufficient support for agriculture that depends less or not at all on pesticides.

Citizens however are aware of the need for pesticide reduction. 1.2 million Europeans have already signed the European Citizens’ Initiative “Save Bees and Farmers” to demand more ambitious reduction targets than those proposed by the Farm to Fork Strategy. The initiative is calling for an 80 percent reduction in the use of chemical pesticides by 2030 and a complete phase-out by 2035.

The global market for pesticides is highly lucrative. A few well-connected and influential agrochemical companies are expanding their control over the market and thriving for always increasing profits. At the forefront: European companies like Bayer and BASF. The EU is the largest pesticide export market in the world, now investing more and more in countries of the Global South, where EU companies are allowed to export pesticides banned on their own due to their harmful effects on human health and the environment.

A long-standing demand of international civil society calls for laws that effectively ban these toxic exports. In 2020, the EU Commission has committed to act accordingly in its Chemicals Strategy for Sustainability. The EU Commission’s announcement to lower import tolerances for residues of pesticides not approved in the EU could also help to reduce the spread of the most toxic substances. However, agricultural producers in third countries fear being excluded from the EU market when not getting sufficient support for alternative ways to protect their crops. These examples demonstrate that the European Green Deal must also be seen as a tool of foreign policy, as it impacts all countries with trade relations to the EU...

Rachel Carson in Silent Spring reminds us that pesticide is a misnomer. We really shouldn’t use that term because it infers that these toxic chemicals just kill pests. But in fact, they are biocides; they kill everything. They may kill weeds, but they also kill birds and beneficial species, and they can kill people.

The Legal Battle Against Roundup and Other Biocides

In a recent historic legal settlement Bayer has agreed to pay $10 billion to settle thousands of claims that their herbicide Roundup causes cancer. Andrew Kimbrell is a public attorney, author, and founder of the Center for Food Safety (CFS). CFS has made successful legal challenges against some of the world’s most flagrant polluter’s like Monsanto and Dow Chemical, as well as their enabler the EPA while advocating for an organic, regenerative food system. Andrew Kimbrell was interviewed by Arty Mangan of the Bioneers.

Bioneers: Carey Gillam described Roundup in her book Whitewash: The Story of a Weed Killer, Cancer, and the Corruption of Science, by saying, “It’s the pesticide on our dinner plates, a chemical so pervasive it’s in the air we breathe, our water, our soil, and even increasingly found in our own bodies.”

ANDY: Rachel Carson in Silent Spring reminds us that pesticide is a misnomer. We really shouldn’t use that term because it infers that these toxic chemicals just kill pests. But in fact, they are biocides; they kill everything. They may kill weeds, but they also kill birds and beneficial species, and they can kill people. Whether it is glyphosate [the active ingredient in Roundup] or Dicamba or every other insecticide, fungicide, and herbicide, they are all biocides. It should never be a surprise that something intended to kill weeds causes non-Hodgkin’s lymphoma (NHL). It should never be a surprise that an insecticide doesn’t just kill the target corn borer, but kills bees, pollinators and birds and causes cancer. They are biocides and it is impossible to limit them to specific living organisms. They will always go to other living organisms and if they’re neurotoxins, they will cause neurological damage; if they’re carcinogenic, they’ll cause cancer. It is Neanderthal biology to assume that you can use biocides massively and not affect other living organisms, not just the one you’ve targeted it for.

Ironically, and this is true of some insecticides like neonicotinoids, they are actually very ineffective in killing the target insects, but very effective in killing bees and other off-target organisms. Of course, Carey Gilliam is right. But the context we should be aware of, as Rachel Carson wrote in 1962, is that pesticides are biocides capable of killing many other living organisms.

Bioneers: In 2018 Dewayne Johnson, a school groundskeeper, was awarded $289 million after a jury said that glyphosate caused his terminal cancer. In that trial, the Monsanto Papers revealed that Monsanto knew for decades that Roundup is carcinogenic.

Andrew Kimbrell: There have been two state cases and one federal court case. In the Dewayne Johnson case, the jury originally awarded $289 million. There was the federal case in which Edwin Hardeman, who was just using Roundup in his garden, got $80 million. And the Pilliod couple were originally awarded $2 billion. There were three trials and Monsanto lost all three of them, and in two of them there were specific science hearings by the jury. Monsanto/Bayer has about 125,000 cases coming. Because of these cases Bayer’s stock plummeted. They had to make a move, which was the recent $9.6 billion settlement, the largest out-of-court product liability settlement in legal history...

Bioneers: As you mentioned, the International Agency of Research of Cancer (IARC), an agency of the World Health Organization has declared glyphosate as a probable carcinogen. The EPA says it is not a likely carcinogen. What is the relationship between FDA and EPA and companies like Monsanto/Bayer? Who do those regulatory agencies serve and how do they come up with their conclusions?

Andrew Kimbrell: Let’s talk about some specifics. The herbicide Dicamba was to be used in herbicide resistant crops to take the place of Roundup, which is increasingly ineffective due to weed resistance. In June, the Center for Food Safety won a case in which the Ninth Circuit Court of Appeals determined that in approving Dicamba, the EPA had not done its homework, had not looked at the relevant risks, and had not looked at the field studies research. Therefore, the court declared that biocide illegal. So, we don’t need to figure out whose side EPA is on. It took us several years of litigation to finally get this in front of a court with the EPA dodging and adding new elements to its various directions as to how you can spray it, when you can spray it, etc. Finally we nailed them down, and when a court looked at it, they said that the EPA has done nothing but listen to Monsanto studies and did not look at what’s actually going on in the fields – the millions of acres being destroyed by Dicamba drift. The ruling is shockingly stark. It says the EPA’s approval of Dicamba is illegal.

EPA has been carrying Monsanto’s water for years. Unfortunately, many of our regulatory agencies are captured by the corporations. There are no real restrictions against regulators cycling back into the industry. There’s a revolving door where members of these companies often get high positions in the agencies and then cycle out. It’s been an open scandal for the 30 plus years that I’ve been practicing as an attorney. Much of our work is necessary because of the corruption at the agencies. We have to take them to court to have the courts be the referee to make sure we actually get real regulation. We can undo the work of FDA, EPA and USDA when they are simply doing the bidding of the major corporations.

Neonicotinoids Playbook for Poisoning the Earth

• Via the Guardian / Plummeting insect numbers 'threaten collapse of nature'

• Insect collapse: ‘We are destroying our life support systems’

The world’s insects are hurtling down the path to extinction, threatening a “catastrophic collapse of nature’s ecosystems”, according to the first global scientific review.

The analysis, published in the journal Biological Conservation, says intensive agriculture is the main driver of the declines, particularly the heavy use of pesticides.

We May Be Consuming More Glyphosate Than Ever Before

Factoid: According to the Environmental Protection Agency (as of 2015), there are more than 865 registered pesticides registered in the US

The “Poison Papers” represent a vast trove of rediscovered chemical industry and regulatory agency documents and correspondence stretching back to the 1920s. Taken as a whole, the papers show that both industry and regulators understood the extraordinary toxicity of many chemical products and worked together to conceal this information from the public and the press. These papers will transform our understanding of the hazards posed by certain chemicals on the market and the fraudulence of some of the regulatory processes relied upon to protect human health and the environment.

Gains associated with pesticide use include:

2. It has been estimated that millions of lives have been saved from death through malaria, yellow fever, sleeping sickness, Black plague and typhoid

3. With respect to agriculture- 35% lost before cropping and 20% post with pesticides ; without pesticide another 8% of additional damage would occur.

4. Forestry - millions of acres have been sprayed; Spruce budworm and gypsy moth. some contend however that these insects cycle normally and would decrease without the use of pesticides.

Cons associated with pesticide use:

Today, nearly 275 weeds and more than 500 insects are resistant to at least one pesticide. That's more than five times the amount in 1950. And farmers lose more crops to pests today than they did in the 1940s.

2. Most chemical pesticides are nonspecific - effect a large number of species, pest and non-pest.

3. Pesticides treadmill: from 1940 --> 1984 crop loss has increased from 7 --> 13% while pesticide use increased 12X. Why? with spraying we have killed the predators of the pests, and once the pest species is released from natural controls ( both no predation and no competition) their populations escalate.

5. Pesticide use has threatened and continues to impact wildlife negatively.

6. Each year WHO estimates 1-5 million people have acute poisoning and die. In the US, 20,000 are estimated to suffer from some form of pesticide poisoning.

History of pesticide use

The following 14 files are in this category, out of 14 total.