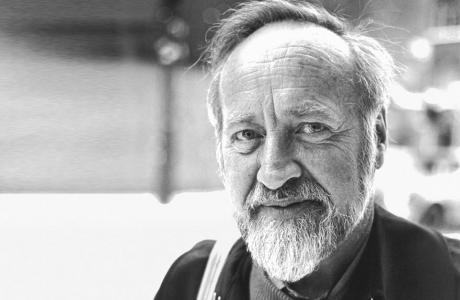 A few people are born who are world class heroes to those who know them and unkown to the great majority, until one day their inescapable influence floats to the surface and is generally recognised for the cream it is. In hindsight such leaders go on to become household names.

Such a man was Bill Mollison: backwoodsman, academic, storyteller, lady’s man and to many just ‘Uncle Bill’, but doing all these things par excellence. In consequence he has left a worldwide movement of remarkable resilience. He has left much useful information and not a few words of guidance and encouragement for those who will miss him most.

Born and growing up in Stanley, Tasmania, he left school at fifteen to help run the family bakery and before 26 went through the occupations of shark fisherman and seaman (bringing vessels from post-war disposals to southern ports), forester, mill-worker, trapper, snarer, tractor driver and naturalist.

His lack of formal education gave him many learning opportunities in how the real world works.

Bill joined the CSIRO (Wildlife Survey Section) in 1954 and gained extensive research knowledge. His time in the Tasmanian rainforests gave him the founding structure for what became his life’s passion - Permaculture. The idea that we could consciously design sustainable systems which enabled human beings to live within their means and for all wild life to flourish with us.

A spell at the Tasmanian Museum in curatorial duties, a return to field work with the Inland Fisheries Commission took him back to college in 1966 living on his wits running cattle, security bouncing at dances, shark fishing, and teaching part-time at an exclusive girls' school. Upon receiving his degree in bio-geography, he was appointed to the University of Tasmania where he later developed the unit of Environmental Psychology. During his university period (which lasted for 10 years), Bill independently researched and published a three-volume treatise on the history and genealogies of the descendants of the Tasmanian aborigines.

In 1974, with David Holmgren, Bill developed the beginning of the permaculture concept, leading to the publication of Permaculture One. He became fixated on proving and promulgating what he saw as a world renewing concept. Leaving the University in 1978, abandoning a secure academic tenure at the age of fifty (an unheard of move) Bill devoted all his energies to furthering the system of permaculture and spreading the idea and principles worldwide. He has taught thousands of students, and has contributed many articles, curricula, reports, and recommendations for farm projects, urban clusters and local government bodies.

In 1981, Bill Mollison received the Right Livelihood Award (sometimes called the "Alternative Nobel Prize") for his work in environmental design. In recent years, he has established a 'Trust in Aid' fund to enable permaculture teachers to reach groups in need, particularly in the poorer parts of the world, with the aim of leaving a core of teachers locally to continue appropriate educational work.

We are helped in remembering Bill by his 1996 autobiography Travels in Dreams. Typically he laughs at himself: “This book is a work of fiction: most if not all of it is lies. Even the lies are imprecise reports of old lies overheard.” He wasn’t universally liked. One reason being he was committed to disrupt the status quo of misguided unfeeling management. “First feel fear, then get angry. Then go with your life into the fight.” He was eloquent about the need for peaceful ‘warriors’ as he called them to challenge the stupidity of ill-governance on a global scale. His own fears about being ineffectual were misguided: “Nobody takes any notice of me and even my friends continually criticise me.” In reality he engendered a massive global respect which will endure and grow as others develop his foundation thinking. The pinnacle of his career to his students was the publication in 1988 of The Permaculture Designers Manual, honoured to this day by devotees as 'The Bible of Permaculture'. If devotees suggests falsely some religious connotation it’s really that Bill pioneered a deep respect for the planet and for more sensible approaches for how we could live on it: “We are true time scouts finding places now for what will be needed then.”

Bill asked: “Are we the public or the private person?” The truth of the matter is that for all seasons we are both. Perceived as challenging, a huge harvester of great ideas from around the world (and not always crediting their sources) Bill was also a sensitive man, eloquent raconteur, poet and appreciative of the poetry of others. He knew how to provoke others to action, but also when to withdraw and let others carry on the work. He paraphrased Lao Tzu: “True change is to so change things that it seems natural to everybody but no-one knows who thought of it.” And: “Our best will not be our children’s best.”

Though often outwardly gruff and challenging there was real heart to everything he did.

Bill Mollison founded the first and original Permaculture Institute, which was established in 1979 to teach the practical design of sustainable soil, water, plant, and legal and economic systems to students worldwide. Bill’s legacy is that hundreds of thousands of past students have created a world-wide network to take his concept forward. This is a world in which we are acutely aware of our environment, its capacity and its limitations, and we design systems to meet human needs which respect that.

Bill spent his final years in Sisters Beach, Tasmania. The final words must go to him in true classical tone:

“If you hear that I am dead tell them they lie.“