The Story of Bottled Water 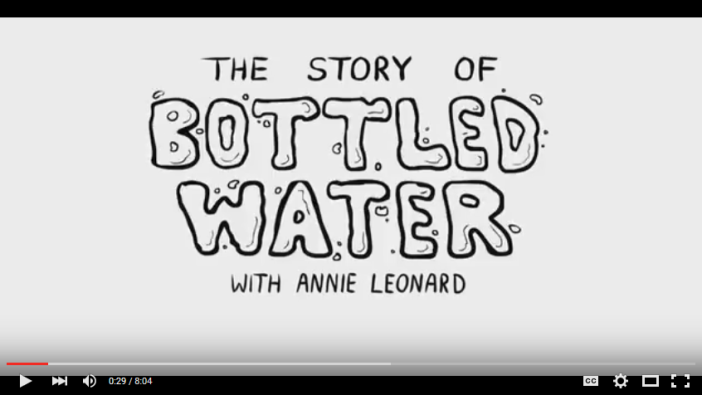 The Story of Bottled Water, a documentary released on March 22, 2010 (World Water Day), employs the Story of Stuff style to tell the story of manufactured demand—how you get Americans to buy more than half a billion bottles of water every week when it already flows virtually free from the tap.

Over five minutes, the film explores the bottled water industry’s attacks on tap water and its use of seductive, environmental-themed advertising to cover up the mountains of plastic waste it produces.

The film concludes with a call for viewers to make a personal commitment to avoid bottled water and support public investment in clean, available tap water for all.

The Story of Bottled Water was co-created and released by The Story of Stuff Project and a coalition of partners, including Corporate Accountability International, Food & Water Watch, Polaris Institute, Pacific Institute and Environmental Working Group. The movie was produced by Free Range Studios.

Bottled water is poised to become the king of beverages in the United States.

It seems that Americans love their bottled water. According to data recently released by Beverage Marketing Inc., the amount of bottled water sold rose 7.9 percent in 2015. That’s on top of a 7 percent increase in 2014.

The bottled water industry has exploded in recent years, and enjoys annual sales of more than $35 billion worldwide. In 2002, almost six billion gallons of bottled water were sold in the U.S., representing an increase of nearly 11 percent over 2001. Americans paid $7.7 billion for bottled water in 2002, according to the consulting and research firm Beverage Marketing Corporation. Bottled water is the fastest-growing segment of the beverage industry...

More and more environmentalists are beginning to question the purpose of lugging those heavy, inefficient, polluting bottles all over the Earth. The parent organization of the World Wildlife Fund, the Switzerland-based World Wide Fund for Nature, argues strongly that the product is a waste of money and is very environmentally unfriendly.

Although bottled water now seems ubiquitous, it is an almost completely new drink category. If you go back to 1986—the life of anyone over 30—sales of bottled water were trivial. In 1986, the typical American didn’t drink even a single half-liter bottle a week.

The surge in bottled water sales, which is to say, bottled water's decades-long rise in popularity, is a reminder that there is often a large gap between well-publicized protests and even bans, and our actual buying behavior.

Think Outside the Bottle

March 2015 / In a bold move toward pollution control, San Francisco has just become the first city in America to ban the sale of plastic water bottles, a move that is building on a global movement to reduce the huge amount of waste from the billion-dollar plastic bottle industry.

From a Movie to a Movement

We have a problem with Stuff. We use too much, too much of it is toxic and we don’t share it very well. But that’s not the way things have to be. Together, we can build a society based on better not more, sharing not selfishness, community not division.

The Story of Microfibers

Our Water, Our Future

The Story of Microbeads

The Story of Solutions

The Story of Change

The Story of Broke

The Story of Electronics

The Story of Cosmetics

The Story of Cap & Trade