Significance of the Rain Forest Canopy in Ecological Processes

Canopies of all types, including boreal and tropical forests, play a crucial role in the maintenance of ecological processes, although thus far, the attention of researchers has tended to concentrate on those in the tropics, rather than those in temperate climates.

The forest canopy is the principal site for the interchange of heat, oxygen, water vapor, and carbon dioxide. It has been estimated that most photosynthetic activities in the biosphere occur in the canopy. Forest canopies account for almost half of the carbon stored in terrestrial vegetation and fix more carbon per year than any other habitat. Ecophysio-logical studies are therefore crucial to predict the impact of increasing atmospheric concentrations of carbon dioxide in global warming. Thus, forest canopies both control regional climate and play an important role in regulating global climate.

'Carbon fixing', photosynthesis, what the rainforests do and why they need to be protected 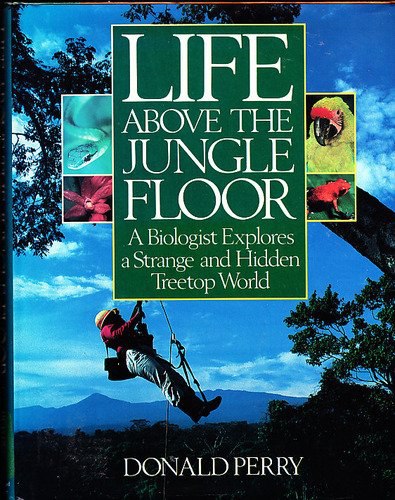 "It is possible that we could still save tropical forests and ourselves... each of us is responsible."

- Life Above the Jungle Floor, A Biologist Explores a Strange and Hidden Treetop World

Simon & Schuster, copyright 1986 - One can almost hear an uncomfortable rustling in academic halls as new discoveries bring fascinating pieces of the canopy puzzle into place. The emerging picture clearly shows that the canopy has been a foremost habitat in the evolution of life. 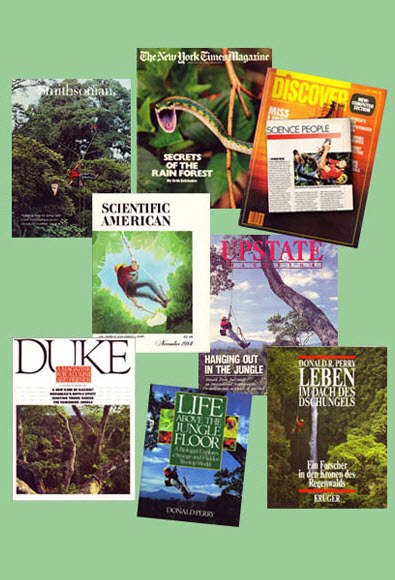 The canopy world flourishes at the equivalent of the “15th floor” of the rain forest, 50 metres up.

Rainforest Alliance - Forests are home to some two-thirds of the world's plants and animals. As they are cleared and degraded, the unique flora and fauna that depend on these ecosystems become threatened with extinction.

>In 1978, studying the role of herbivorous bats in dispersing seeds of the monkey-pot tree in Costa Rica, Perry hit on the solution: a special web of ropes and cables that permitted unrestricted movement across a canopy. With John Williams, an engineer friend from California, Perry developed a system for a platform, 400 metres of rope web, pulleys and descent ropes, with which he could move from ground level to above the tree top and anywhere inside the canopy world. "The combination of the web and the descent ropes gave unrestricted movement through a volume of forest an acre in area and 30 metres in depth, opening great biological wealth to observation," Perry recalls.

With Williams he designed the Automated Web for Canopy Exploration (AWCE), using a stainless steel cable, a rigid chair and wireless controls. This took much of the fear out of canopy research and enabled two researchers at a time to manoeuvre up to the canopy at 30 centimetres a second. The AWCE design won him a Rolex Award, and Popular Science said it "promises to open the jungle to research the same way scuba gear opened the oceans".

Popular Science's description (including a reference (above) we were offering to the work of Cousteau, a comparison between the rich life in the oceans and rich life of rain forests and the scientific breakthrough of Cousteau's invention of the scuba gear enabling close up studies and Don's invention of climbing gear enabling science close up and personal) - http://books.google.com/books?id=J3sUn8WV22MC&pg=PA87&lpg=PA87&dq=don+perry

>Don Perry, Ecotram's founder was instrumental in igniting Costa Rica’s ecotourism-based economic transformation and a whole new field -- the scientific investigation of the most complex communities of life on earth found living on high tropical tree limbs. This work was responsible for the zip-line fad sweeping the globe as well as the use of cable-ways to view nature. Now Ecotram LLC has added a new investigative and ecotouristic tool to its lineup of cable-ways for exploring and studying nature. [LinkedIn]

Steven Schmidt: "It is possible that we could still save tropical forests and ourselves... each of us is responsible."

It's about Gaia, it's about watching the planet breathing and much more

The following 9 files are in this category, out of 9 total.