Fossil fuel burning currently adds nearly six billion tons of CO2 to the atmosphere every year. Only half of this CO2 is removed by forests and oceans.

Want some perspective on how much carbon dioxide human activity produces? Here it is

Earth has been increasing its greenhouse gas concentration pretty steadily over the past couple of hundred years. This is almost entirely attributable to the burning of fossil fuels (we can tell because of the isotopic mix of carbon in those fuels).

We've all read the reports, or seen the media discussion. Except it can be a little hard to grasp the sheer magnitude of what our species has accomplished. Dire warnings that we've crossed 400 parts-per-million of atmospheric CO2 (a level last seen tens of millions of years ago) may sound pretty bad, but it takes a little intellectual imagination to really grasp what's going on.

Let's give that a shot.

From Scientific American / The Crazy Scale of Human Carbon Emission

About the Author: Caleb A. Scharf

Dr. Caleb A. Scharf is Director of Astrobiology at Columbia University, and has an international reputation as a research astrophysicist, and asa lecturer to college and public audiences.The UK's Guardian newspaper has listed his blog Life, Unbounded, as one of their "hottest science blogs." Scharf is author and co-author of morethan 100 scientific research articles in astronomy and astrophysics. His work has been featured in publications such as New Scientist, ScientificAmerican, Science News, Cosmos Magazine, Physics Today, and National Geographic, as well as online at sites like Space.com and Physorg.com. His textbook for undergraduate and graduate students, Extrasolar Planets and Astrobiology, won the 2012 Chambliss Prize of the AAS. His articles and reviews have appeared in such prestigious publications as Science, Nature, The Astrophysical Journal, and Monthly Notices of theRoyal Astronomical Society. Dr. Scharf is a regular keynote speaker at academic meetings, such as for the American Physical Society, museums, and both public and private venues, including the American Museum of Natural History, the Rubin Museum of Art in New York. He has been a guest on Science at NPR, William Shatner's "Weird or What?" and has served as a consultant to editors and producers at National Geographic Magazine, The Science Channel, The Discovery Channel, and The New York Times.

Spacecraft Flies by a Habitable Planet

Putting Odds on the Human Future

The CO2 that nature emits (from the ocean and vegetation) is balanced by natural absorptions (again by the ocean and vegetation). Therefore human emissions upset the natural balance, rising CO2 to levels not seen in at least 800,000 years. In fact, human emit 26 gigatonnes of CO2 per year while CO2 in the atmosphere is rising by only 15 gigatonnes per year - much of human CO2 emissions is being absorbed by natural sinks. 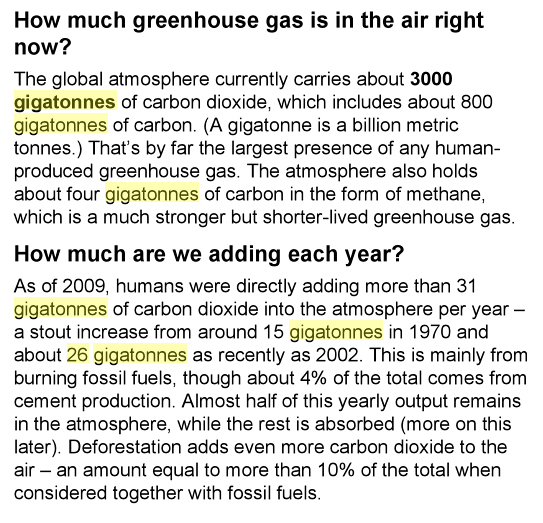