The magic of the Amazon: A river that flows invisibly all around us

The largest river on Earth is invisible — and airborne

The Amazon River is like a heart, pumping water from the seas through it, and up into the atmosphere through 600 billion trees, which act like lungs. Clouds form, rain falls and the forest thrives... The interconnected systems of this region... provide environmental services to the entire world... a parable for the extraordinary symphony that is nature.

The Amazon is the "lung of the world," because of its massive power to have vital gases exchanged between the forest and the atmosphere. We also hear about the storehouse of biodiversity. While many believe it, few know it. If you go out there, in this marsh, you'll be amazed at the -- You can barely see the animals. The Indians say, "The forest has more eyes than leaves."

On a typical sunny day in the Amazon, 20 billion metric tons of water flow upward through the trees and pour into the air, an invisible river that flows through the sky across a continent.

“This river of vapor that comes up from the forest and goes into the atmosphere is greater than the Amazon River,” says Antonio Donato Nobre (TED Talk: The magic of the Amazon: A river that flows invisibly all around us)... a most remarkable thing about the Amazon — even more than its 4,000 miles of river or its hundreds of billions of trees — is that it’s essentially a massive, solar-powered sprinkler system, spritzing water across a continent. If this were a man-made system, Nobre says, it would be the envy of the world. Here’s why Nature is the most badass engineer of all.

Every tree is a silent geyser. Through a process called transpiration, a large tree in the Amazon can release 1,000 liters of water into the atmosphere in a single day. “There is a frantic evaporation taking place here,” Nobre says. He likens the force to a geyser spouting water into the air, but “with much more elegance.” After all, geysers draw their power from the scalding heat of magma, while trees only need to bask in the sunlight to release their invisible steam. Plus, they have the sheer force of numbers; hundreds of billions of trees in the jungle release as many as 20 billion metric tons of water into the atmosphere every day. That means that while the Amazon, which pours 17 billion tons of water into the Atlantic Ocean a day, may be the largest river on earth — it’s still exceeded by the airborne river drifting above the canopy of the trees.

The airborne river turns into rain, which replenishes the forest. Rainforests create their own rainclouds, replete with microscopic spores, pollen and fungi, or “smells”... These smells are critical for the lifecycle of the jungle, as the steam from the trees condenses around these microscopic particles, forming clouds, which eventually release torrential rain. This process is unique to the jungle; oceans, for instance, rarely create heavy clouds like the Amazon’s, because sea air is not so richly seeded with plant life. “This relation between a living thing, which is the forest, and a nonliving thing, which is the atmosphere, is ingenious in the Amazon,” Antonio Donato Nobre, a senior researcher at Brazil’s National Institute of Amazonian Research, says. And it’s the reason the invisible river returns to the soil, replenishes the forest, only to rise again through the treetops in a virtuous cycle.

Read about the Rainforest

Looking Back as We Turn from 2017 to a New Year

"This year has been an unequivocal disaster for the future of the planet. President Donald Trump has managed to take a wrecking ball to years' worth of hard work and painstaking negotiations. If not undone, our retreat from the Paris Climate Accords and the EPA's Clean Power Plan alone mean our planet's temperature will rise at a greater rate and our citizen's health will degrade. Other changes in environmental regulations on drilling and auto and appliance efficiency will only make matters worse."

Perhaps the thing that worries me the most is the massive deforestation underway in areas like Asia and Latin America. Countless trees and millions of square miles of jungle and forest have been removed to accommodate our desires for more -- more wood, more farmland, more pasture, more meat.

When I first looked down upon the Amazon rainforest in 2001, I saw vast areas of jungle and a wide and winding copper colored river that went on and on and on. A river that was impossible to miss and like no other on the planet. By 2011, however, the part that was most noticeable wasn't the river or the jungle but the large swaths of empty land.

From space, it looks empty because we are far away. We don't see the crops or the cattle but we do see the loss. We see the loss of an incredibly diverse ecosystem that once held endless possibilities for new medicines and other discoveries.

We see the loss of a home for so many species that will now have to learn to adapt and survive somewhere else -- or not. And we see the loss of a large amount of carbon, sequestered in a living and breathing ecosystem which created massive amounts of oxygen for all of us.

That carbon, once the giver of life to millions of species all over our planet, now has a new role: greenhouse gas. It will sit in our atmosphere as CO and CO2 for millennia, but in this case as an invisible blanket, warming our planet, changing our climate and creating a cataclysmic mess for future generations. 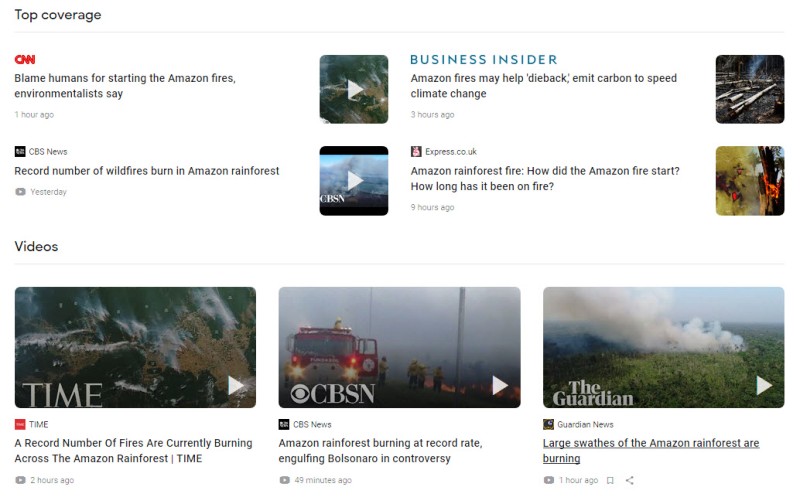 The following 8 files are in this category, out of 8 total.