The World Bank president departs from science and reveals he is another realm of understanding...

Article republished courtesy of The Nation and Columbia Journalism Review

Call to “get rid of” David Malpass at the world’s largest development bank.

This story is part of Covering Climate Now, a global journalism collaboration cofounded by Columbia Journalism Review and The Nation

John Kerry, the United States special presidential envoy for climate, signaled Tuesday (September 20, 2022) that the Biden administration is working behind the scenes to remove the president of the World Bank, Trump appointee David Malpass. Kerry’s comments came hours after Al Gore, the former US vice president and longtime climate activist, called Malpass “a climate denier” and called on President Joe Biden “to get rid of” him and “put new leadership in” at the world’s largest development bank.

Kerry and Gore were speaking at an event hosted by The New York Times as part of Climate Week NYC, an annual series of public events coinciding with the United Nations General Assembly that aims to galvanize climate action. Malpass, appearing separately from Kerry and Gore at the event, called Gore’s call for his removal “very odd.” On stage, Malpass was asked three times whether he “accepted the scientific consensus that the man-made burning of fossil fuels is rapidly and dangerously warming the planet.” Each time, the World Bank president declined to answer before finally saying, “I don’t even know, and I’m not a scientist.”

“We need to get a new head of the World Bank, for god’s sake,” Gore said before a live audience while answering questions from Somini Sengupta, the Times’ international climate correspondent. In a heated tone, Gore said that “it’s ridiculous to have a climate denier at the head of the World Bank” at a time when poorer countries need affordable loans to install solar and wind facilities rather than burning more coal and other fossil fuels.

“If you’re in Nigeria and you want to privately finance a new solar farm,” Gore explained, “you have to pay an interest rate seven times higher than what the OECD [i.e, wealthy] countries pay. If you want to build a wind farm in Brazil, you have to pay interest three times higher than what the US pays.” With 90 percent of future heat-trapping emissions projected to come from developing countries, such unaffordable interest rates imperil the Paris Agreement goal of limiting temperature rise to 1.5 degrees Celsius, as scientists say is imperative to avoid the worst impacts of climate change.

Providing loans at more favorable interest rates is “the job of the World Bank, and they’re simply not doing it,” Gore said. “We need to get rid of that leadership and put new leadership in, and I hope President Biden will take that initial step.”

“We will hear from the World Bank president later [today],” Sengupta said.

“Good! Tell him I said hello,” Gore replied, provoking chuckles from the audience.

“Actually, tell him I said goodbye,” Gore added as the chuckles turned into laughter.

Appearing hours later on the same stage, Kerry made it clear the Biden administration shares Gore’s displeasure with Malpass, whom Trump nominated to head the World Bank in 2019. Formerly the chief economist at Bear Stearns, an investment bank that collapsed during the 2008 financial crisis, Malpass was an economic adviser to Trump’s 2016 presidential campaign and later served as President Trump’s undersecretary for international affairs at the Treasury.

Posing a question from the audience, this reporter told Kerry that his former Senate colleague Gore had called on the Biden administration to get Malpass removed before asking Kerry, “Does the administration have confidence in David Malpass as the head of the World Bank?”

“I can’t comment on what the status is of an individual, that is the president’s decision,” Kerry replied. “I will tell you this, though. I have been pushing for months, along with others in the administration, and it’s an open door, not pushing against a shut door…. Earlier today in a meeting we had with a big group of nations talking about development, we made it crystal clear that we need to have major reform and a major restructuring with respect to the multinational development banks.”

Kerry added that the African Development Bank now allocates about 67 percent of its lending to climate, and that the Asia Development Bank is “doing pretty well,” as is the European Development Bank. Notably missing from his list was the World Bank, an absence Kerry alluded to when he added, “If I keep going, you will get a feel for where I am.” Again, laughter rippled through the crowd.

The United States cannot unilaterally remove Malpass; the World Bank’s governing board has the sole authority to select and remove the bank’s president. But Kerry pointed out that the US is the World Bank’s “largest shareholder,” and historically the US has exercised decisive influence over the governing board’s decisions. Citing “the Europeans, our friends, the Germans, the French, the Brits,” Kerry said, “It is up to us to pull people together and get that reform. And [there is] a lot of discussion about doing that right now.”

The World Bank Group Wavers between the Past and the Future

All of the 193 UN members and Kosovo that are WBG members participate at a minimum in the IBRD. Most of them also participate in some of the other 4 organizations: IDA, IFC, MIGA, ICSID...

Technically the World Bank is part of the United Nations system, but its governance structure is different: each institution in the World Bank Group is owned by its member governments, which subscribe to its basic share capital, with votes proportional to shareholding. Membership gives certain voting rights that are the same for all countries but there are also additional votes which depend on financial contributions to the organization. The President of the World Bank is nominated by the President of the United States and elected by the Bank's Board of Governors. As of 15 November 2009 the United States held 16.4% of total votes, Japan 7.9%, Germany 4.5%, the United Kingdom 4.3%, and France 4.3%. As changes to the Bank's Charter require an 85% super-majority, the US can block any major change in the Bank's governing structure.

The term "World Bank" generally refers to just the IBRD and IDA, whereas the term World Bank Group or WBG is used to refer to all five institutions collectively.

The World Bank Institute is the capacity development branch of the World Bank, providing learning and other capacity-building programs to member countries...

In recent years there has been an increased focus on measuring results of World Bank development assistance through impact evaluations. An impact evaluation assesses the changes in the well-being of individuals that can be attributed to a particular project, program or policy. Impact evaluations demand a substantial amount of information, time and resources.

The World Bank has long been criticized by a range of non-governmental organizations and academics, notably including its former Chief Economist Joseph Stiglitz, who is equally critical of the International Monetary Fund, the US Treasury Department, and US and other developed country trade negotiators.[21] Critics argue that the so-called free market reform policies – which the Bank advocates in many cases – in practice are often harmful to economic development if implemented badly, too quickly ("shock therapy"), in the wrong sequence, or in very weak, uncompetitive economies. World Bank loan agreements can also force procurements of goods and services at uncompetitive, non free-market, prices.

In Masters of Illusion: The World Bank and the Poverty of Nations (1996), Catherine Caufield argues that the assumptions and structure of the World Bank operation ultimately harms developing nations rather than promoting them. In terms of assumption, Caufield first criticizes the highly homogenized and Western recipes of "development" held by the Bank. To the World Bank, different nations and regions are indistinguishable, and ready to receive the "uniform remedy of development". The danger of this assumption is that to attain even small portions of success, Western approaches to life are adopted and traditional economic structures and values are abandoned. A second assumption is that poor countries cannot modernize without money and advice from abroad...

At its annual meeting in Tokyo in 2012, the World Bank launched a two-year process to rewrite environmental and social standards. Civil society organisations hope that this Safeguard Review will strengthen the rules, but they also have reason to fear that the opposite may happen.

The Bank has already begun to hold consultations with governments, the private sector and civil society. While the topic may sound rather abstract, the debate on the Safeguards deserves broad public attention. World Bank Safeguards matter far beyond the Bank itself because they serve as guidelines for many other multilateral, bilateral and private-sector institutions.

The Safeguards are inextricably linked to poverty reduction because they have very practical implications for the lives of poor people. Unless these rules are enforced stringently, unintended consequences of development funding all too often include social abuses, gross injustice and irreversible environmental damage. Examples are the damage done to people and the environment when large hydroelectric dams are built, when industrial-scale agribusinesses expand or when mining companies dig for mineral resources.

"The Bank is stepping up its lending through financial intermediaries, which also has a bearing on environmental and social matters. For good reason, even its Independent Evaluation Group wants the Bank to adopt a consistent approach across all types of lending."

The World Bank’s Safeguard Policies grew organically from 1989 on. Unfortunately, the World Bank has done a poor job in monitoring their implementation. Its reporting on the environmental and social impacts of its programmes is mostly inadequate. The Safeguard Review must address these fundamental problems. At the same time, it must establish structures and incentives to ensure that Safeguards are not only considered when projects are being prepared. They must be imple­mented throughout a project’s life.

The Safeguards only apply to two branches of the World Bank Group: the International Bank for Reconstruction and Development (IBRD), which lends to middle-income countries, and the International Development Association (IDA), which lends to low-income countries. Both IBRD and IDA lend mostly to the public sector, but mixed public-private sector funding is on the rise.

There are separate environmental and social standards for the World Bank Group’s private sector lending windows, the International Finance Corporation (IFC) and the Multilateral Investment Guarantee Agency (MIGA). The IFC and MIGA standards have already been reviewed, and they now cover more subjects than the Safeguards do, including, for example, core labour standards, which are missing from the World Bank Safeguards.

The crucial weakness of the IFC/MIGA standards, however, is that they rely largely on these institutions’ private-sector clients to monitor the undesired impacts of their action without third party verification or adequate reporting.... 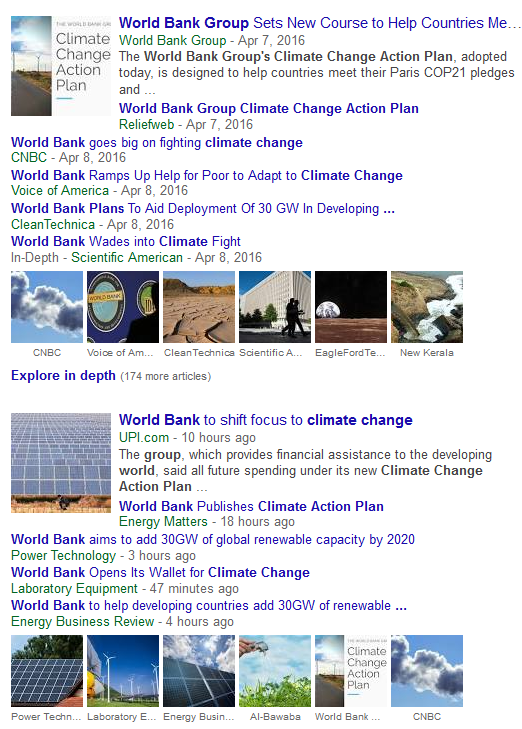