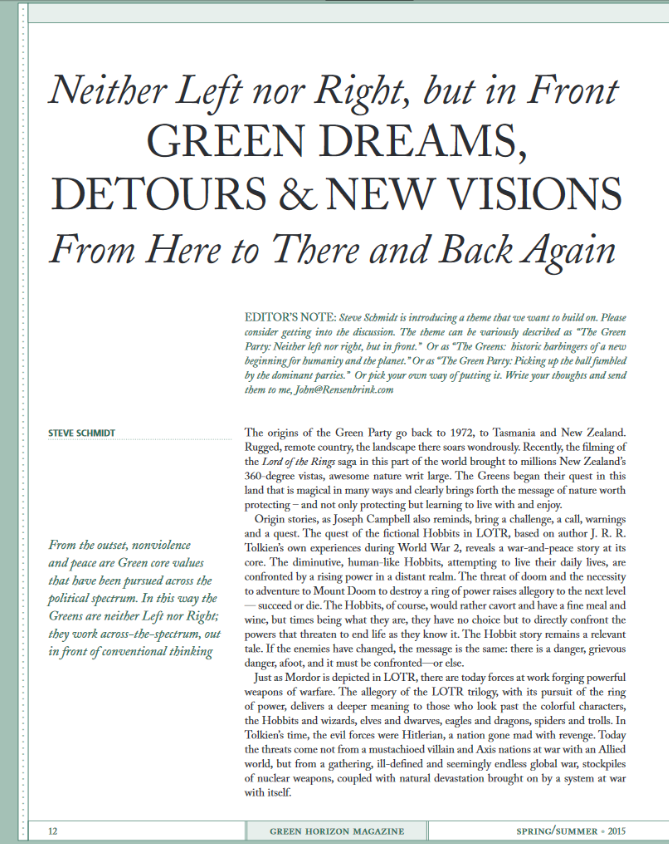 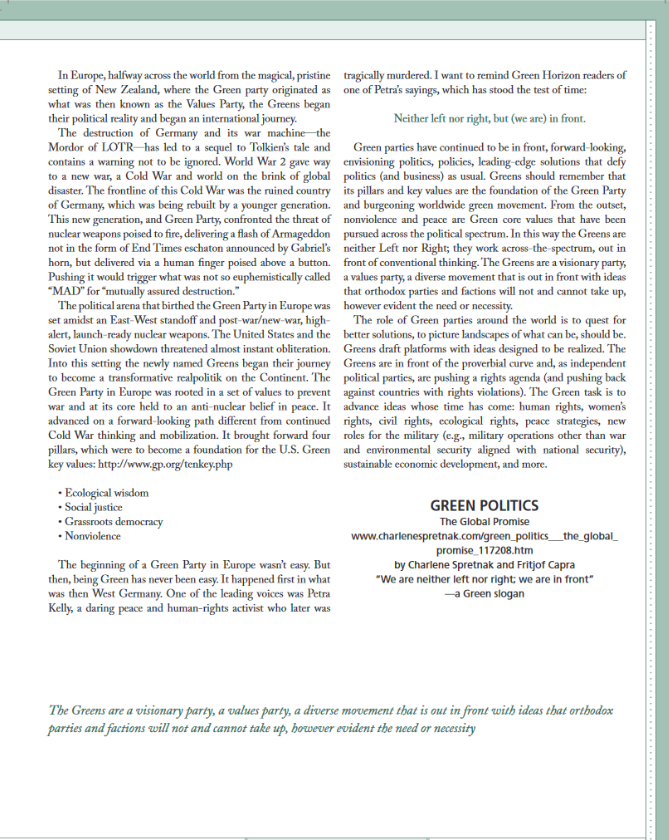 Neither left nor right, but in front

Green Dreams, Detours & New Visions: From Here to There and Back Again

'Out in Front' Politics

The origins of the Green Party go back to 1972, to Tasmania and New Zealand. Rugged, remote country, the landscape there soars wondrously. Recently, the filming of the Lord of the Rings saga in this part of the world brought to millions New Zealand’s 360-degree vistas, awesome nature writ large. The Greens began their quest in this land that is magical in many ways and clearly brings forth the message of nature worth protecting – and not only protecting but learning to live with and enjoy.

Origin stories, as Joseph Campbell also reminds, bring a challenge, a call, warnings and a quest. The quest of the fictional Hobbits in LOTR, based on author J. R. R. Tolkien’s own experiences during World War 2, reveals a war-and-peace story at its core. The diminutive, human-like Hobbits, attempting to live their daily lives, are confronted by a rising power in a distant realm. The threat of doom and the necessity to adventure to Mount Doom to destroy a ring of power raises allegory to the next level — succeed or die. The Hobbits, of course, would rather cavort and have a fine meal and wine, but times being what they are, they have no choice but to directly confront the powers that threaten to end life as they know it. The Hobbit story remains a relevant tale. If the enemies have changed, the message is the same: there is a danger, grievous danger, afoot, and it must be confronted—or else.

Just as Mordor is depicted in LOTR, there are today forces at work forging powerful weapons of warfare. The allegory of the LOTR trilogy, with its pursuit of the ring of power, delivers a deeper meaning to those who look past the colorful characters, the Hobbits and wizards, elves and dwarves, eagles and dragons, spiders and trolls. In Tolkien’s time, the evil forces were Hitlerian, a nation gone mad with revenge. Today the threats come not from a mustachioed villain and Axis nations at war with an Allied world, but from a gathering, ill-defined and seemingly endless global war, stockpiles of nuclear weapons, coupled with natural devastation brought on by a system at war with itself.

In Europe, halfway across the world from the magical, pristine setting of New Zealand, where the Green party originated as what was then known as the Values Party, the Greens began their political reality and began an international journey.

The destruction of Germany and its war machine — the Mordor of LOTR — has led to a sequel to Tolkien's tale and contains a warning not to be ignored. World War 2 gave way to a new war, a Cold War and world on the brink of global disaster. The frontline of this Cold War was the ruined country of Germany, which was being rebuilt by a younger generation. This new generation, and Green Party, confronted the threat of nuclear weapons poised to fire, delivering a flash of Armageddon not in the form of End Times eschaton announced by Gabriel’s horn, but delivered via a human finger poised above a button. Pushing it would trigger what was not so euphemistically called “MAD” for “mutually assured destruction.”

The political arena that birthed the Green Party in Europe was set amidst an East-West standoff and post-war/new-war, high-alert, launch-ready nuclear weapons. The United States and the Soviet Union showdown threatened almost instant obliteration. Into this setting the newly named Greens began their journey to become a transformative realpolitik on the Continent. The Green Party in Europe was rooted in a set of values to prevent war and at its core held to an anti-nuclear belief in peace. It advanced on a forward-looking path different from continued Cold War thinking and mobilization. This brought forward four pillars, which were to become a foundation for the U.S. Green Party’s ten Key Values:

The beginning of the European Green Party was convoluted and extremely difficult, but being Green has never been easy. One of the leading voices was Petra Kelly, a daring peace and human-rights activist who later was tragically murdered. I want to remind Green Horizon readers of one of Petra’s sayings, which has stood the test of time:

"We are neither left nor right; we are in front”

Green parties have continued to be in front, forward-looking, envisioning politics, policies, leading-edge solutions that defy politics (and business) as usual. Greens should remember that its pillars and key values are the foundation of the Green Party and burgeoning worldwide green movement. From the outset, nonviolence and peace are Green core values that have been pursued across the political spectrum. In this way the Greens are neither Left nor Right; they work across-the-spectrum, out in front of conventional thinking. The Greens are a visionary party, a values party, a diverse movement that is out in front with ideas that orthodox parties and factions will not and cannot take up, however evident the need or necessity.

The role of Green parties around the world is to quest for better solutions, to picture landscapes of what can be, should be. Greens draft platforms with ideas designed to be realized. The Greens are in front of the proverbial curve and, as independent political parties, are pushing a rights agenda (and pushing back against countries with rights violations). The Green task is to advance ideas whose time has come: human rights, women's rights, civil rights, ecological rights, peace strategies, new roles for the military (e.g., military operations other than war and environmental security aligned with national security), sustainable economic development, and more.

The beginning of the Green Party in the US was also convoluted and an extraordinary challenge and much different than Europe's multi-party system.

A 'duopoly', a dominant two-party system is a multi-state obstruction to ballot access. Electoral laws in the U.S. act as barriers to independent parties and alternative policy.

As Green parties look forward to advancing a wide-ranging rights agenda, forward-looking practical solutions, and green-best practices, it’s important to remember that the original vision of the Greens arose from spiritual values that align with Green principles and positions. One of the many cofounder Greens who originated Green ideas and ideals in the United States, Charlene Spretnak, wrote of “ecological wisdom, social responsibility, grassroots democracy, nonviolence, and gender equality.” Charlene’s book, Green Politics: The Global Promise, coauthored with physicist Fritjof Capra, helped birth the beginning of the U.S. Green movement that led, in the 1990s, to the establishment of the U.S. Green Party. The value beliefs are expressed in Green founding documents - https://www.scribd.com/collections/4165209/Green-Party-of-the-US

Again, it can be and should be recalled that the Green parties began in beauty, in New Zealand settings that feature sublime nature, and then came of age in a challenging, confrontational post-war setting that featured imminent threats of nuclear war. The Greens were at the forefront of the anti-nuke movement in European politics and, in the years since the Greens' founding, a popularly supported drawdown of nuclear weapons systems in Europe and nuclear energy in Germany came to be. Unfortunately, although having reduced the threat of cataclysmic nuclear war with a series of agreements and START treaties, the trend toward peaceful coexistence is now being reversed. New definitions of national security are needed as a new Cold War and new “modernized” nuclear weapons are on the horizon.

The current situation politically in Europe and across the region into the Middle East is a rising, palpable threat of nuclear escalation. Threats of larger conflict are set against ongoing regional wars, specifically, the current crisis in the Ukraine; the escalating tension and conflict between the United States, the EU/NATO, and the Russian Federation; the entangling alliances with Iran and China; and the Mideast's multigenerational conflicts. Against this backdrop, the United States intends to introduce a next generation of nuclear weapons (the B61-12), to be carried by squadrons of next-generation F-35 fighters, the most expensive weapons system in the nation’s history. 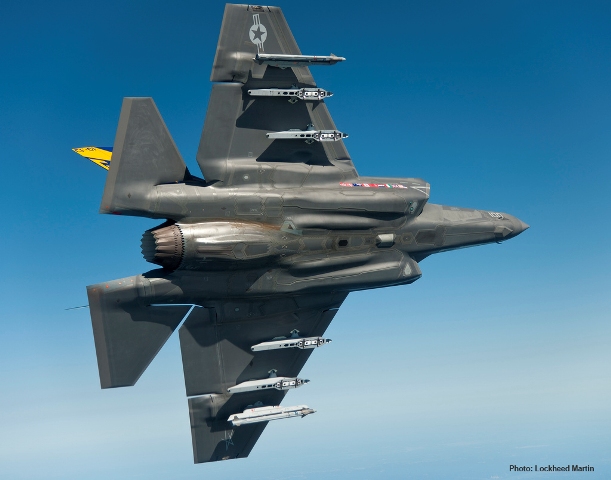 Within this provocative setting, the work of the politics of peace by Greens continues. The threats of continued war, the potential for flashpoints, mistakes, or provocation, remind us of the fundamental reason the Green parties started their work at the frontlines. The fact that weapons of nuclear annihilation are being forged anew in "usable" configurations, planned for deployment to the frontlines of Europe and the Mideast, the Near East, and Asia, demands a continued Green quest for peaceful solutions. The Green parties, now in over 100 countries, have a mission: to stay out in front, to speak of values, and envision better solutions and policies than unending war, escalating threats of nuclear delivery, and the continuing and inexplicable assault on the natural world on which we depend for our very lives.

The Green Party: Out in Front Organizing to End Nuclear Weapons

In the 1980s and 1990s, in Europe at the frontlines of the nuclear brinksmanship and nuclear saber-rattling of the U.S. - Soviet Union, a peace movement found leadership among the many new Euro Green parties.

These efforts to remove nuclear weapons grew to historic dimension and succeeded in nonproliferation treaties, nuclear arsenal removals, and more as the Cold War drew to an endgame few predicted.

The Berlin Wall fell, the Iron Curtain opened, the peace openings offered promise -- and a coming generation of existential challenges.

Again, a green politics confronts next generation nuclear arms and an escalating climate crisis -- both now being acknowledged for the crisis the bring.

Green Horizon Magazine introduces the author of 'Out in Front'

Steven Schmidt founded Global Policy 360 (now GreenPolicy360) and Green Institute online. He entered politics in the 1960's helping to organize the Vietnam Moratorium Committee in Washington DC and acting a California coordinator. He later worked on campaigns with Jerry Brown, including as a senior advisor and worked with the Governor to put together the 1992 "We the People/Take Back America" platform. He is co-author, with Roger Morris, of Strategic Demands of the 21st Century: A New Vision for a New World, the Green Institute’s initial policy paper and organized the Surviving Victory conference in Washington DC with the Institute. A key drafter of the founding national Green Party Platform, he chaired the original platform committee, serving from 1995 to 2001. He initiated the first Common Ground platform between the Association of State Green Parties and European Federation of Green Parties and assisted in the proposal to draft the first Green Global Charter. In 1994 he ran for Lt. Governor on the Green ticket in New Mexico with Roberto Mondragon, achieving major party status for the New Mexico Green Party, and over the course of the 1990’s worked to organize a legally recognized U.S. Green Party. From 1995-1999, Steve served with distinction on the New Mexico State Board of Education. Recently president of a leading interactive firm, he established M Channel to set up a forward-looking online media company. Steve can be followed on Facebook, Twitter, Strategic Demands and his Siterunner and Occasional GrnPolicy Comments can be seen at GreenPolicy360.

Military Operations Other Than War -- http://en.wikipedia.org/wiki/Military_operations_other_than_war

Green Party of the US – Platform and Key Values -- http://www.greenpolicy360.net/w/Category:Green_Platform