The Debate Over the Reality of Net Zero Heats Up

Read about the Crossfire over Net Zero

Why is the concept of net-zero emissions under fire just as it emerges as the "North Star" for economic and industrial strategy in many of the world's most powerful economies? And does it matter? Will well-intentioned critiques of demonstrably inadequate net-zero strategies catalyze more ambitious decarbonization plans or will they inadvertently undermine a trend that has helped successfully push climate issues up the corporate and political agenda...

Explainer: Will global warming ‘stop’ as soon as net-zero emissions are reached? 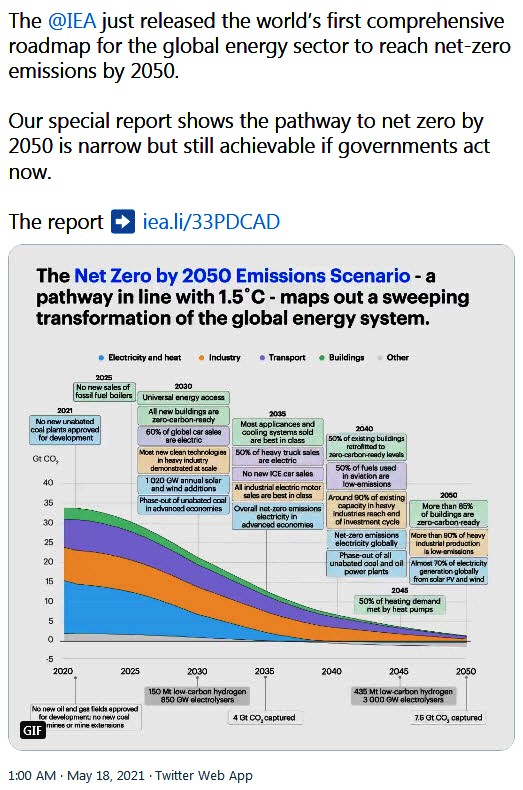 Investors should not fund new oil, gas and coal supply projects if the world wants to reach net zero emissions by mid-century, the International Energy Agency (IEA) announced today (May 18, 2021), in the top global watchdog's starkest warning yet to curb fossil fuels.

"The pathway to net zero is narrow but still achievable. If we want to reach net zero by 2050 we do not need any more investments in new oil, gas and coal projects."

No place for new fossil fuels if world is to reach net zero by 2050, says landmark report

Via The New Yorker

The crucial turning points of the climate era can be found in a series of sentences, some of them pretty opaque, but all of them critical. The latest came on Tuesday morning in a report from the International Energy Agency, in Paris, and it could very well signal the start of the end of the fossil-fuel era. So it’s important to first set it in the context of a few other such statements.

In 1995, the Intergovernmental Panel on Climate Change said, “The balance of evidence suggests a discernible human influence on global climate.” Ever since NASA’s Jim Hansen told Congress, in 1988, that climate change was under way, the world’s scientists and governments had been scrambling to reach workable conclusions on which to base policy. This sentence was the key line of the I.P.C.C.’s Second Assessment Report: close observers understood that, over the objections of countries such as Saudi Arabia, the world’s scientific community was announcing, irrevocably, that global warming was very real.

In 2015, in Article 2 of the Paris climate accord, the world’s governments committed to “holding the increase in the global average temperature to well below 2°C above pre-industrial levels and pursuing efforts to limit the temperature increase to 1.5°C above pre-industrial levels, recognizing that this would significantly reduce the risks and impacts of climate change.” This was the first time that the world had set a solid target, and that target was a hard one: holding the rise in warming as close as possible to 1.5 degrees Celsius, a goal urged by climate activists and the most vulnerable nations.

The statement on Tuesday from the I.E.A. is a recommendation. It reads, “There is no need for investment in new fossil fuel supply in our net zero pathway. Beyond projects already committed as of 2021, there are no new oil and gas fields approved for development in our pathway, and no new coal mines or mine extensions are required.” That emphasis is in the original—in fact, in the new report that sentence is in headline-size type, as well it should be. It says that, after two hundred and fifty years, in the view of the I.E.A., the time has come to stop exploring for oil, gas, and coal. No rational plan for getting to 1.5 degrees (or anywhere near it) can deal with any new supply. Instead, the “the focus for oil and gas producers switches entirely to output—and emissions reductions—from the operation of existing assets.” That is, we obviously can’t stop burning fossil fuel tomorrow, but we have to be headed decisively in that direction—which means stopping the development of new fields and draining what we must from existing fields to hold us over until we’ve built enough solar panels and wind turbines.

This message comes from a credible source—indeed, the I.E.A. has always been captive to the fossil-fuel industry, or at least to the countries, such as the United States, where that industry has held sway. For years, its forecasts of how fast renewable energy would spread were understatements; it was an engine of the status quo.

But now governments and corporations, pushed by civil society—and, perhaps, by a recognition of our climate plight—are suddenly committing to net-zero targets. Virtually all the big banks, for instance, have made this pledge. And now the I.E.A. has told them what it means. If they’re serious about it, they don’t just have to lend money to people who want to set up solar panels. (Clearly, they have to do that. “Policies need to be designed,” the report says, “to send market signals that unlock new business models and mobilise private spending, especially in emerging economies.”) Just as important, they must now stop doing what they’ve long been doing, which is pumping trillions of dollars into fossil fuels....

The fact that the I.E.A. is now saying this so loudly and clearly will be an immeasurable boost to campaigners around the world who have been working to block the fossil-fuel industry and its backers among the banks, insurance companies, and asset managers. It’s also a reflection of how much the world is changing. Part of that is due to the election of Joe Biden, of course, but the sheer logic of the scientific argument can eventually cut through even vested interest. It’s been an agonizing three-plus decades since Hansen’s warning, and that vested interest may have delayed action too long; waiting until the icecaps were actually melting was an incredible mistake.

But the strength of these four sentences is what our hope for a livable world rests on, the intellectual scaffolding erected by science and reason—and the passion of hardworking activists—on which to base our future. We will all find out if they’re strong enough for that daunting task.

Toward Net Zero and/or a Renewable Revolution

Michael Baxter, Editor of Techopian writes that... the Gates approach to climate change is advocating delay — because technology can reverse it all. In a way, he is failing to follow his own advice and advises being lulled into inaction.

In his new book, How to Avoid a Climate Disaster: The Solutions We Have and the Breakthroughs We Need, Bill Gates advocates geoengineering and nuclear...

Bill Gates says one thing about climate change, Michael E Mann, the world-leading climatologist, says something different. The billionaire and expert present solutions to climate change; one of them is right, is the other wrong though, and who do we believe?

Gates is a billionaire; Mann merely an expert. Big bucks are riding on the net-zero approach; by contrast, renewables are efficient and may ultimately lead to super-cheap or even free energy. What are the commercial interests in that? If the source is free to all, it's only the infrastructure that is costly and that covers its own cost in years, not decades.

The billionaire effect will tell. More people will read the Gates book than the Mann book because the cult of the billionaire is what we have today.

Michael Mann suggests that Gates has become an advocate of net-zero or cleantech; that he has adopted the framing of (climate action) delayers, thereby becoming a de facto spokesperson for their cause.

Mann says: "Net zero is a very clever way of saying 'we can continue to put carbon into the atmosphere if we take it out.' ... What we need is a renewable revolution, a revolution that will ultimately lead to cheap energy, which will support developing countries and provide the backbone of technologies that are not currently possible because of the high cost of energy. Instead, we are in danger of going down the net-zero route; the result will be more philanthropist billionaires, but we will be worse off as a society.

Mann's latest book, The New Climate War: The Fight to Take Back Our Planet, is both optimistic and pessimistic.

GreenPolicy360: Climate action using 'all tools in the toolbox' is at the center of our message. Full speed on pushing for 'clean, renewable energy' everyday, everywhere, individually and 360 system wide. We are all in -- the climate change crisis is our generation's great challenge.

Mann highlights the need for a renewables revolution now and highlights the work of Mark Zachary Jacobson, a California, Stanford University professor of civil and environmental engineering.

A Net Zero 'Explainer' from the Associated Press

More than 100 countries — responsible for about two-thirds of the world’s heat-trapping gases — have announced plans to cut their greenhouse gas emissions to “net zero” in coming decades to help curb man-made climate change.

The target has also been embraced by companies, states and cities wanting to help stop the planet from getting too hot for human comfort. China made a splash in September promising “carbon neutrality” by 2060, and U.S. President-elect Joe Biden has promised America would be there by 2050.

Green Energy Action at Every Level

The Challenge of the 21st Century

New Zealand jumps out in front ... 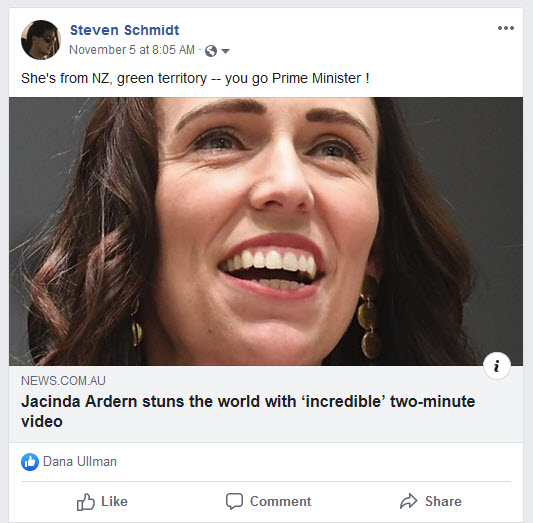 The total amount of energy used by the building on an annual basis is roughly equal to the amount of renewable energy created on the site.

Net-Zero Buildings Are Catching On

Once a Fringe Idea, Net-Zero Energy Buildings Will Soon Be the Law

US Department of Energy / National Institute of Building Sciences

As a MediaWiki site, GreenPolicy360 begins with a quick Wikipedia review of ... 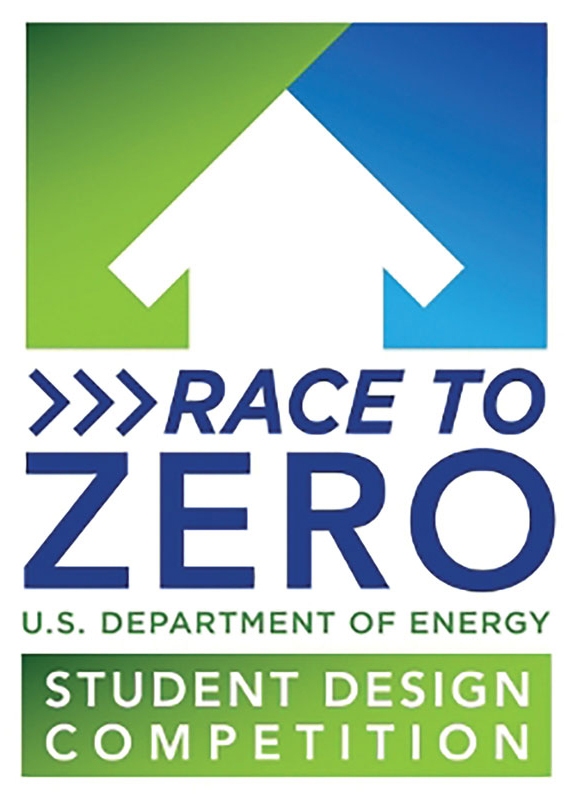 Going Green, beginning in the early days of the modern environmental movement...

"I have a continuing commitment to specific programs and policies that reduce California’s dependence on foreign oil, increase the diversity and resilience of our energy supply and ease the impact of rising energy costs on California...

Wind energy can help us move away from reliance on oil. California should maintain its leadership in developing energy projects using bio-gas and agricultural wastes.

Solar energy has a wide range of cost-effective applications..."

Bill Gates Environmental Math and Getting to Zero CO2

In this video Bill Gates gives his speculation that there will be a massive innovation in energy consumption and energy production. Since this video is only two minutes long, go ahead and watch it now.

He proposes a very simple argument using this formula:

P = Number of People in the world

Successful green models of initiatives, resolutions/laws/ordinances, data and project information is gathered and organized via keywords/categories/topics and locations. 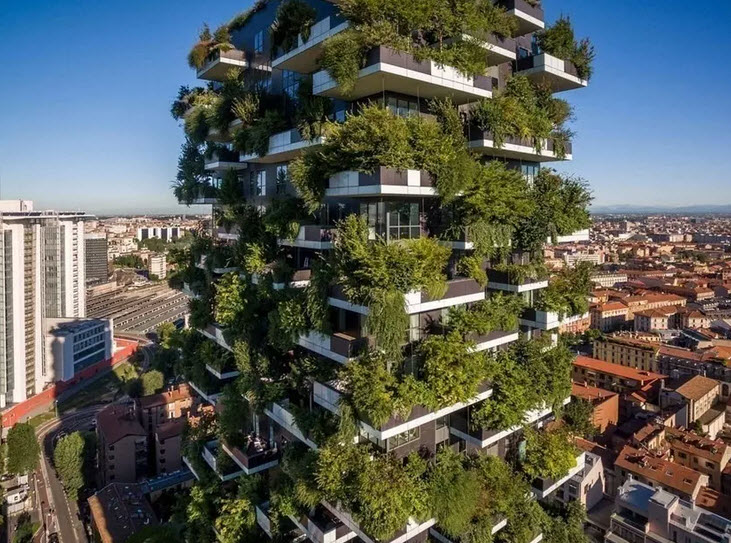