Whenever the causes of climate change are discussed, fossil fuels top the list. Oil, natural gas, and especially coal are indeed major sources of human-caused emissions of carbon dioxide (CO2) and other green house gases (GHGs). The impacts of livestock are increasingly being considered for their climate and environmental impacts -- and alternative approaches proposed for less harmful impacts and sustainable, healthy results.

The life cycle and supply chain of domesticated animals raised for food are additional source of GHGs, and estimates vary of the substantial impact of live-stock farming. Many today agree that with livestock farming/ag alternatives are a necessary strategy for reversing climate change. 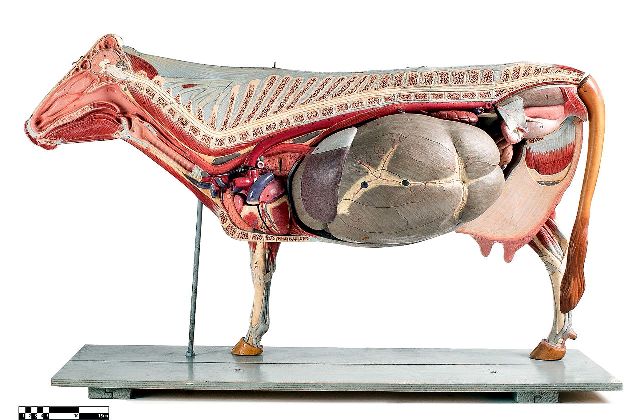 World-wide, there are about 1.5 billion cows and bulls. All ruminants (animals which regurgitates food and re-chews it) on the world emit about two billion metric tons of CO2-equivalents per year. In addition, deforestation - clearing of tropical forests and rain forests to get more grazing land and farm land - is responsible for an extra 2.8 billion metric tons of CO2 emission per year.

According to the Food and Agriculture Organization of the United Nations (FAO) agriculture is responsible for 18% of the total release of greenhouse gases world-wide (this is more than the whole transportation sector).

Consumption of meat and dairy produce is a major driver of climate change.

Recent analyses have shown that it is unlikely global temperature rises can be kept below two degrees Celsius without a shift in global meat and dairy consumption.

Reducing demand for animal products could also significantly reduce mitigation costs in non-agricultural sectors by increasing their available carbon budget. However, there is a striking paucity of efforts to reduce consumption of meat and dairy products.

A number of factors, not least fear of backlash, have made governments and environmental groups reluctant to pursue policies or campaigns to shift consumer behaviour.

The lack of attention afforded to the issue among policy-makers and opinion-formers contributes to a lack of research on how best to reduce meat and dairy consumption.

As a first step in addressing this lack of research, Ipsos MORI was commissioned by Chatham House to undertake the first multi-country, multilingual online survey specifically to explore public attitudes on the relationship between meat/dairy consumption and climate change.

A new study of methane emissions finds that the U.S. is spewing 50 percent more methane, a greenhouse gas 21 times better at trapping heat than carbon dioxide, into the atmosphere than the Environmental Protection Agency previously assumed.

“Overall, we conclude that methane emissions associated with both the animal husbandry and fossil fuel industries have larger greenhouse gas impacts than indicated by existing inventories.” According to the new research published in the 'Proceedings of the National Academy of Science', livestock’s noxious flatulence accounts for a large portion of the methane gas being released into the atmosphere. Researchers say cows are producing twice as much methane gas as scientists previously believed. The states in the US producing the most methane gas were Texas, Oklahoma and Kansas.

The projected transition of livestock systems from pure grazing diets to diets supplemented by higher quality feeds will cut greenhouse gas emissions from land use change globally by as much as 23% by 2030, while improving food availability and farmers’ income, shows new IIASA research.

Livestock production is responsible for 12% of human-related greenhouse gas emissions, primarily coming from land use change and deforestation caused by expansion of agriculture, as well as methane released by the animals themselves, with a lesser amount coming from manure management and feed production.

“There is a lot of discussion about reduction of meat in the diets as a way to reduce emissions,” says IIASA researcher Petr Havlík, who led the study “But our results show that targeting the production side of agriculture is a much more efficient way to reduce greenhouse gas emissions.”

Vegetarian or omnivore: The environmental implications of diet