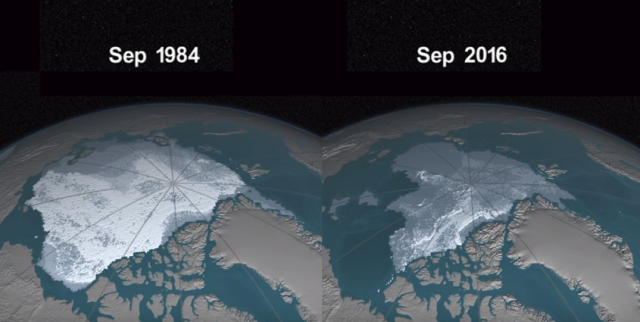 Walt Meier explains that whiter ice is older and thicker ice, which clearly diminishes over the course of the video.

One Reddit commenter described its slow but sure progress as “the slowly withering heartbeat of a dying man.”

The difference is the most shocking in this final image, which compares 1984 and 2016 ice cover side by side.

This file contains additional information, probably added from the digital camera or scanner used to create or digitize it. If the file has been modified from its original state, some details may not fully reflect the modified file.
Retrieved from "https://www.greenpolicy360.net/mw/index.php?title=File:Arctic_ice_Sep_1984_-_Sep_2016_vid.png&oldid=66187"
Categories: