Fact Finding and the '3 Ds' -- Discussion, Debate and Decision-Making

The only conference dedicated to fact-checking worldwide, organized by the International Fact-Checking Network at the Poynter Institute

OSLO, Norway – GlobalFact is an annual fact-checking and journalism conference hosted by the International Fact-Checking Network. This year marks the world’s largest fact-checking summit’s ninth iteration. It will be held in Oslo, Norway, from June 22 to 25, at Oslo Metropolitan University. Virtual tickets are available.

Here’s more about six of the headliners at this year’s GlobalFact.

Dr. Joan Donovan is a leading disinformation researcher and research director at Harvard Kennedy School’s Shorenstein Center, which focuses on the intersection of media, politics and public policy. She is also director of the Technology and Social Change Project, — or TaSC — which examines methods of media manipulation, control over public conversation and democracy influence. The Shorenstein Center website says TaSC “facilitates workshops for journalists, policy makers, technologists, and civil society organizations on how to detect, document, and debunk media manipulation campaigns.”

TaSC’s Media Manipulation Casebook compiles and aggregates information, theory, successful implementations and case studies related to dis- and misinformation. The project is a “team of interdisciplinary researchers analyzing how contemporary technologies of communication are used by different groups to bring about social change, for better or worse.” It has examined and documented information warfare of all stripes, including that of the Milk Tea Alliance, the “Save the Children” conspiracy hashtag and coordinated hashtag campaigns targeting elections in Chile.

Donovan is also a columnist at MIT technology review, and has written for The Atlantic, The New York Times, The Washington Post and other nationally-recognized publications. She is published in various academic journals, including Nature, Social Media + Society, Journal of Contemporary Ethnography, Information, Communication & Society, and Social Studies of Science. Her latest book, “Meme Wars: The Untold Story of the Online Battles Upending Democracy in America,” describes how the Jan. 6 riots manifested from online communities.

Donovan co-created the beaver emoji and has coined many of the terms used in contemporary disinformation media and research.

Jane Lytvynenko is a researcher at Harvard’s Shorenstein Center and at TaSC.

“I’m focusing on devising a training curriculum for newsrooms and academics, auditing research and digging into media manipulation cases globally,” Lytvynenko writes of her work.

Lytvynenko was a senior reporter at BuzzFeed News, where she broke stories exposing online manipulation campaigns. She has also independently reported for outlets such as The Guardian, VICE, The Atlantic and MIT Tech Review.

As a native Ukrainian, Lytvynenko has written much about the Russia-Ukraine war. In February, when fighting first broke out, Lytvynenko published “I Can’t Stop Watching a Livestream in Kyiv,” detailing some of the history of the conflict, images of the war and her thoughts while consuming news and watching Reuters’ livestreams of both Kyiv and Maidan.

Lytvynenko has written in Spanish, English and German.

Anne Applebaum is currently a staff writer for The Atlantic, and winner of the 2004 Pulitzer Prize in general nonfiction for her book, “Gulag: A History.” She has written extensively on the history of the Soviet Union, previously publishing such books as “Red Famine: Stalin’s War on Ukraine” and “Iron Curtain: The Crushing of Eastern Europe, 1944-1956.” Applebaum was a Washington Post columnist for over 15 years and a correspondent for The Economist in Warsaw in the late ’80s and early ’90s, during the fall of Polish communism.

Her most recent book, “Twilight of Democracy: The Seductive Lure of Authoritarianism,” describes a trend among “some of her contemporaries” of eschewing liberal ideas of democracy and favoring “strongman cults, nationalist movements or one-party states.”

“People are not just ideological,” Applebaum writes. “They are also practical, pragmatic, opportunist. The authoritarian and nationalist parties that have arisen within modern democracies offer new paths to wealth or power for their adherents.” The book describes common patterns between the “politicians, journalists, intellectuals, and others who have abandoned democratic ideals” in favor of “illiberalism.”

Craig Silverman currently investigates, reports and writes for ProPublica. The focus of his writing and research has been primarily online false information and media manipulation.

Silverman won the George Polk Award for his work uncovering how Facebook shows users disinformation. “Facebook Gets Paid,” “Facebook Fired An Employee who Collected Evidence of Right-Wing Pages Getting Preferential Treatment,” and “How Facebook Failed Kenosha” are a few in the series that received the Polk. Silverman also won investigation of the year from the Canadian Association of Journalists for his work detailing an international Facebook scam. You can read more about that in “Trap King: How A Massive Facebook Scam Siphoned Millions Of Dollars From Unsuspecting Boomers.”

Silverman previously worked at BuzzFeed News, where he served as media editor.

Patricía Campos Mello is a decorated Brazilian journalist working at Folha de S. Paulo as a columnist and reporter-at-large. Her work spans broad topics from the Afghanistan war to the Ebola epidemic to the refugee crisis in the Middle East.

In 2019, Mello won the International Press Freedom Award from the Committee to Protect Journalists for her work uncovering the business deals of a pro-Bolsonaro group promoting the Brazilian president on social media channels, including WhatsApp. In response to her coverage, Mello was threatened on social media and through phone calls. She was doxxed on multiple occasions and forced to hire a bodyguard and cancel public appearances.

“The attack on Campos Mello was one of the most visible cases of doxing in a year and election cycle in which dozens of journalists were harassed and criticized for their reporting,” the Committee to Protect Journalists wrote in an article.

Mello has worked as a correspondent across multiple countries and continents.

Facts in a Connected, Internet-Era

Rising up against a barrage of online false, misleading claims 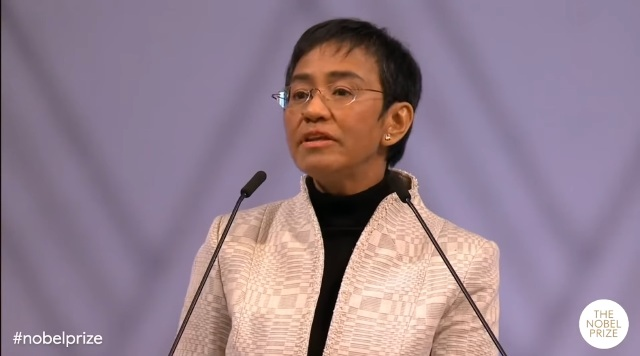 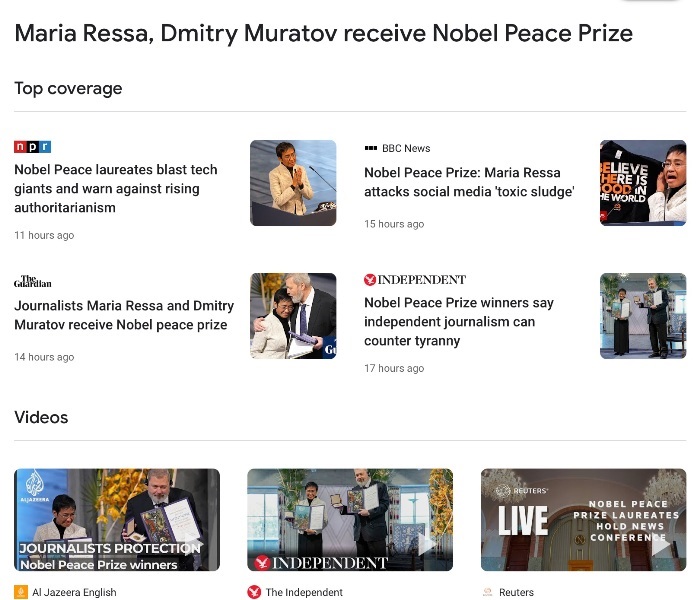 So please, with me, just close your eyes for just a moment, and imagine the world as it should be. A world of peace, trust, and empathy, bringing out the best that we can be.

Open your eyes. Now go, we have to make it happen. Please, let’s hold the line together. Thank you.

A Year Reviewing Fact Checking Around the World

Online... Searching for the Facts, a Never-ending Story

"We can't have a democracy as we know it without a free press, and that's why Poynter is so important."

"Misinformation has exploded online. Hoaxes go viral on social media after most breaking news events, manipulated videos dupe internet users into sharing them and fake news sites publish fabricated stories and cash in on the traffic."

With the launch of its PolitiFact project in 2007 the St. Petersburg Times (now Tampa Bay Times) led a fact-checking initiative that quickly became a world-wide network. Fact-checking best practice are vital and necessary in an era of dis- and mis-information and daily attacks on facts and science.

The Poynter Institute, home of the International Fact Checking Network, which launched in 2015 as a forum for fact-checkers on all continents, has now expanded its fact-finding services.

Poynter's International Fact Checking Network monitors trends, research and best practices, with articles on a dedicated channel on poynter.org and a weekly newsletter co-edited with the American Press Institute. The IFCN produced a code of principles for fact-checking; 46 organizations (including PolitiFact) are currently (Feb. 2018) verified signatories of the IFCN’s code, which is a minimum condition for being accepted as a third-party fact-checker by Facebook.

Launched in 2015, Taking the PolitiFact Model for Fact-Checking and -Finding International 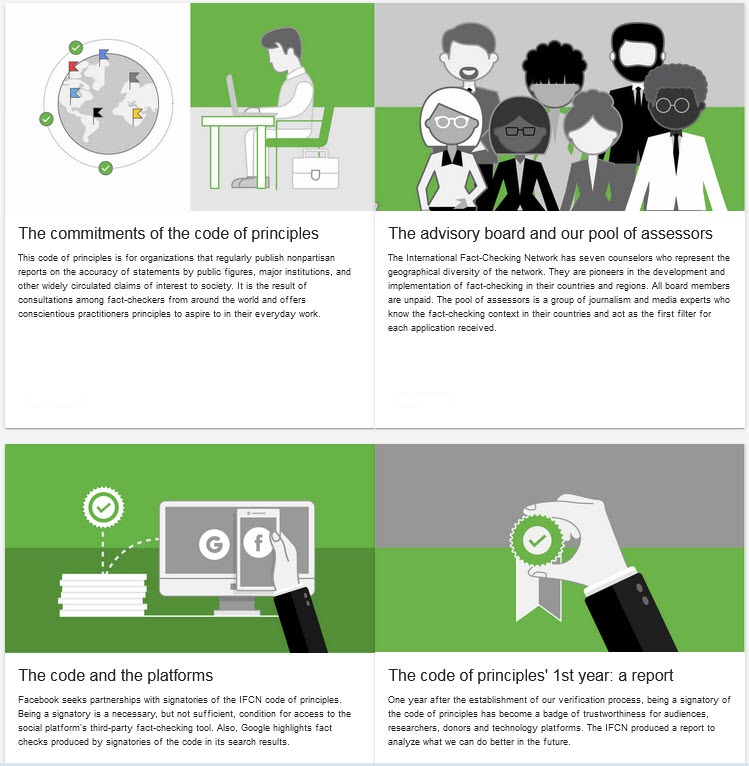 Facts or Not on Social Media 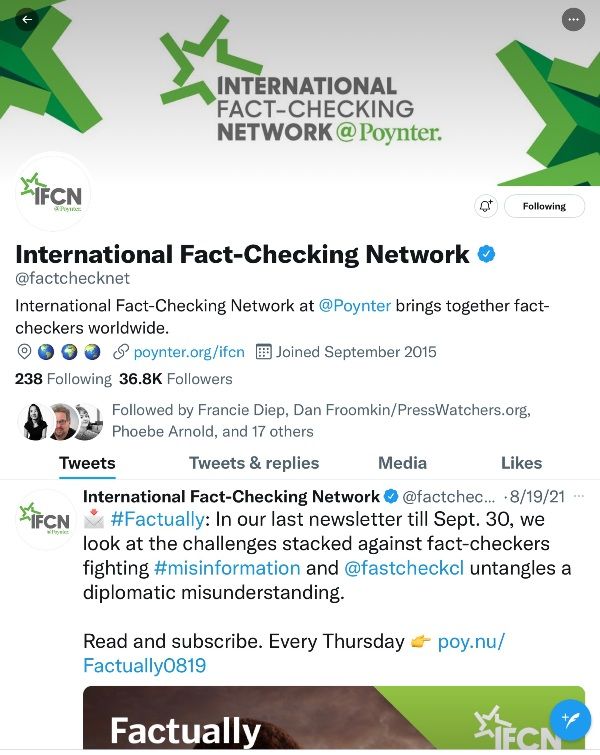 200 Ways to Teach About Fact Checking

GreenPolicy360 ... Science as a Guide 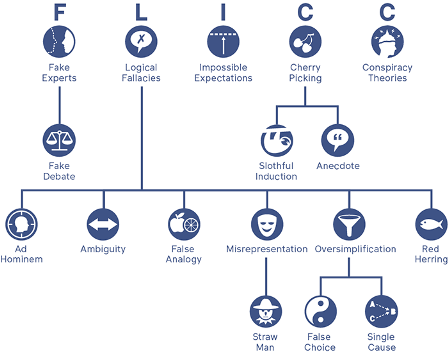 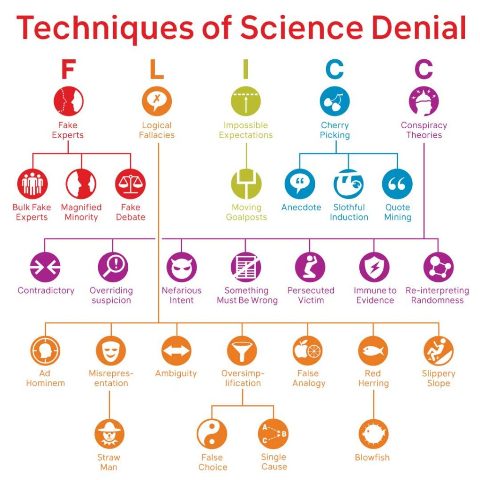 Facing a Tide of Dis-info and Mis-info

A President and Legacy of Dis- and Mis-information

At GreenPolicy360 we continue to advocate for science and facts. Fact checking and fact finding increasingly have grown in importance as social media platforms (Facebook, Twitter, etc) can exponentially multiply falsehoods and untruths.

In the era of the Internet, politics is taking on new powers to reach, engage, interact with, convert and motivate targeted audiences with calls to action.

Fact checking is essential in this powerful, fast changing and evolving Internet ....

Trump made 30,573 false or misleading claims as president. Nearly half came in his final year. 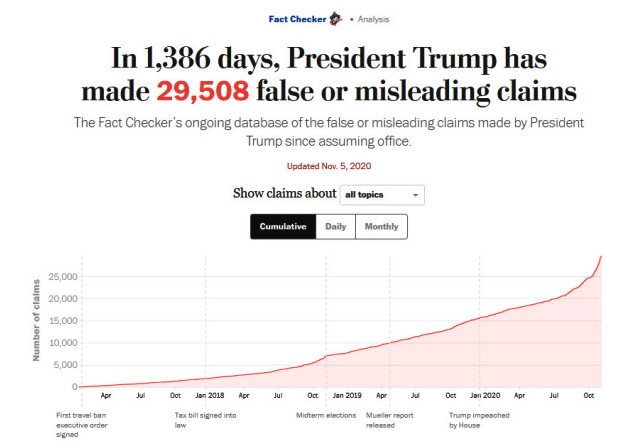 It's Time for Real-Time Fact Checking

Beginning in 2007 in St. Petersburg, Florida, an independent news organization steps up and starts a fact-checking network. It is called PolitiFact.

Soon a growing movement, PolitiFact acts to change the ways news is reported... a battle of facts vs. 'non-facts', facts vs. dis- and mis-info, conspiracies and viral theories, info ops - and com ops weaponizing online and social media communications.

PolitiFact's tagline is bold and memorable amid the online battle --

Stand up for the facts!

Our only agenda is to publish the truth so you can be an informed participant in democracy.

Do your own fact-checking and fact-finding research.

It's more than Orwellian out there. Aim to discover and be guided by facts...